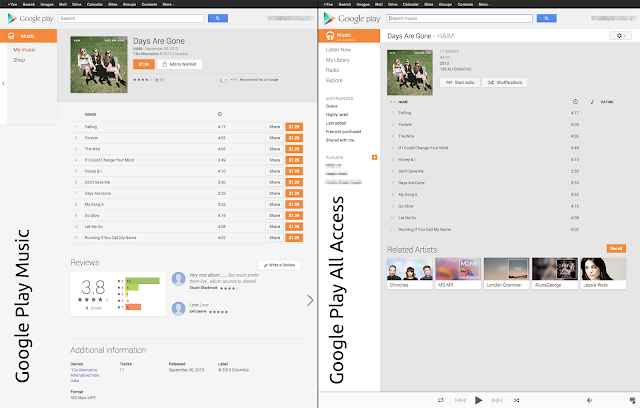 I love, love, love Google Play Music All Access (other than the name... heretofore, just "All Access"). For $10 a month ($8 for use early adopters) you get access to millions of songs as well as cloud storage for 20,000 of your own personal tracks in one handy location. Yes, there are plenty of other good options (if you live in the US), but this works well for me.

Therefore it is with great sadness that I take a few moments to complain.

The Google Play store existed already. My impression was that All Access was an extension of that ecosystem. It seems like a logical progression, however I've been increasingly frustrated by what appears to be an unnecessary separation between the it and the store.

You're probably saying, "Tom! Amigo! These things should be separate. One is a place where you buy  music and the other is a place you're allowed to listen to music you don't own." I guess that's a fair point.

Except I do own some of the music in my All Access library. In fact, if I buy something from Google Play, it automatically shows up in my library. So I'm not smelling what you're cooking.

Pictures being worth a thousand words, I thought a side-by-side comparison was in order. The following are my list of complaints:


Google can't use the same assets for the logos? I know it's really picky of me, but a little consistency por favor!


Initially I thought that one could not buy or share from All Access, but if you hover over a track or album, you'll see a button with three dots arranged vertically. Clicking this gives you a menu of (less important?) options. 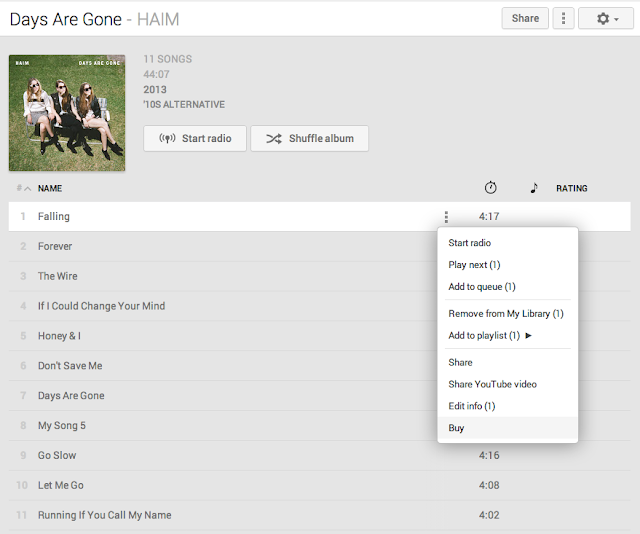 I understand that the AA user interface is geared more towards playing music (thus the controls at the bottom of the page), but a gesture and two clicks creates needless friction. An obvious option for one-click sharing would be a win-win. (Don't we just love "win-win's"?)


Why can't I see ratings, recommendations and reviews from All Access? I want (nay, need!) this information. AA has a distinctly anti-social feel here.

You can get to that data by going to the Play store but, once again, the option to do so is hidden behind the triple dotted menu.

Now I don't know about you, but I do not like to click links that say "buy" unless I'm planning on spending money. It turns out that this is relatively safe, because all the link really does is take you to the aforementioned Play store page as you see on the left in the comparison image above.

Let's look at things coming back the other way. If someone shares music from Google+ and I follow the link, I'm sent to the Play store where we only have the option to listen to a sample or buy. Even though I'm an All Access subscriber there is no easy path to AA from the store where I might listen to something in its entirety or add it to my library.

And let's not even bring up the mobile apps!

None of these issues are deal-breakers. One could argue that Google will get there in time. One could also argue that these are only problems for me and that I need to get over it.

What do you think? Agree or disagree? Have I missed something? Let me know below!