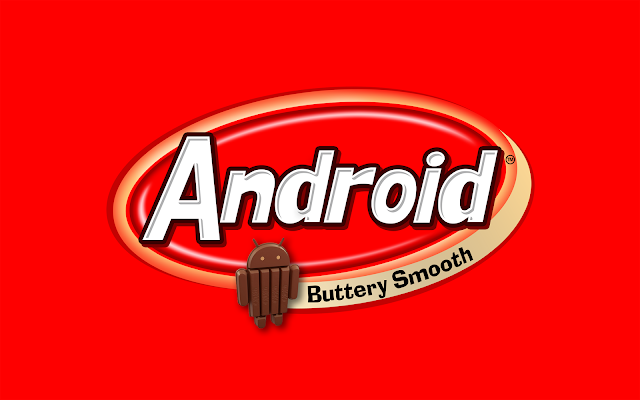 Since the announcement that the next version of Android was going to be called "Kit Kat" instead of "Key Lime Pie" as everyone thought, there have been several attempts to mimic the Kit Kat logo and give it an Android twist. They were fine, but not what I was looking for personally.

I did a little research and... Wow! There are a lot of official logos.

Mainly I wanted to know which font was used (or something close). What I found first is that there are two main variations on the logo; a US and an International.

While the design of the International branding was simpler, I found I preferred the look of the US version. I found a reasonable facsimile of the font used. It is called Kitty Kat (clever!) and can be found online pretty easily.

Next, I sampled the main colors and created a Photoshop color swatch for all of the various components. (Feel free to grab it if you like.)

Let's just concentrate on the main text. This is what a Kit Kat wrapper looks like:

The colors are a bit off from what I wanted (just another variation), but it gives you a general feeling for the styling required. There are the letters (white), some internal shading (grey), an outer border (black in the version I like) and then a drop shadow (dark red).

But first, let's get the letters on the virtual canvas. 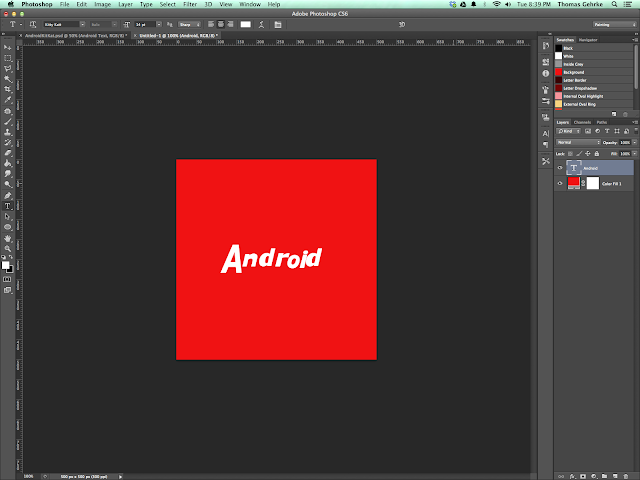 Yeah. You see it too, don't you? The kerning and baselines are all over the place! (It's never easy.)

I decided to create each letter on a separate layer so I could easily arrange them as I wished. 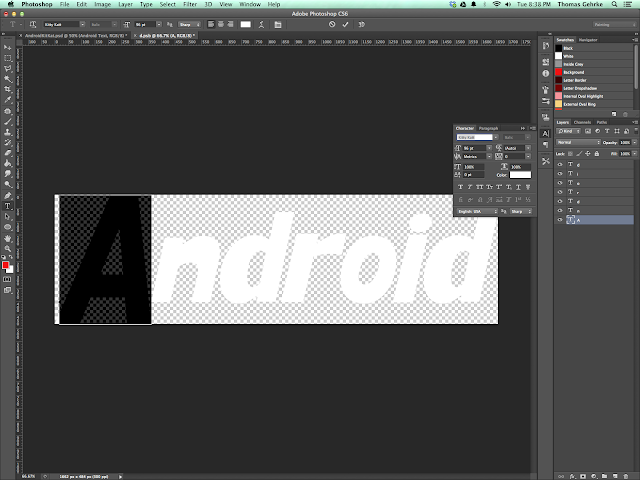 Because I really wanted to treat this as a single item and apply the same styles to each letter, I selected all of the layers and created a smart object. This would allow me to make adjustments later if necessary.

Here is the smart object in with all of the other components of the logo. 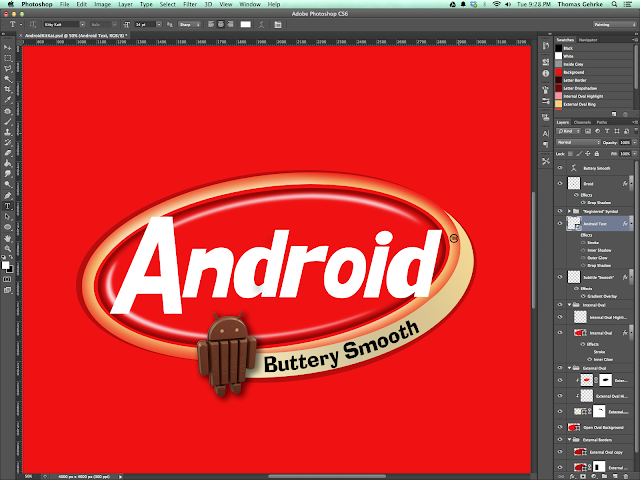 First, we need that grey internal shadow. Not surprisingly, I went with an Inner Shadow with the Choke set to 100% to get that solid edge rather than a blurry one normally associated with a shadow style. 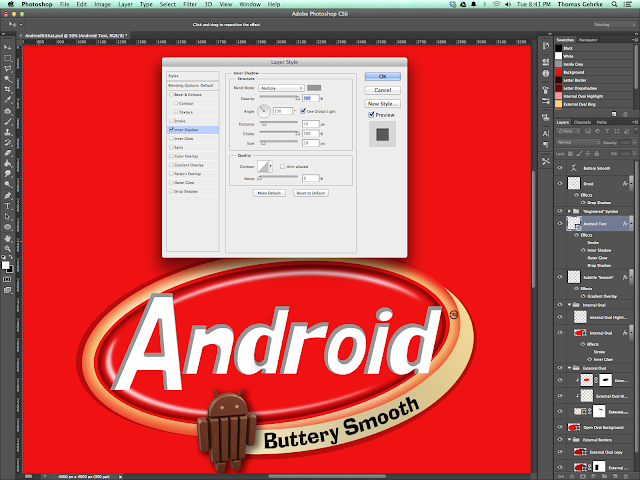 That's not quite right, is it? The shadow in the actual logo does not meet the edges of the letters. We really can't change that with the Inner Shadow, but what we can do is create a Stroke on the inside of the letter and using the same color as the letter (white). 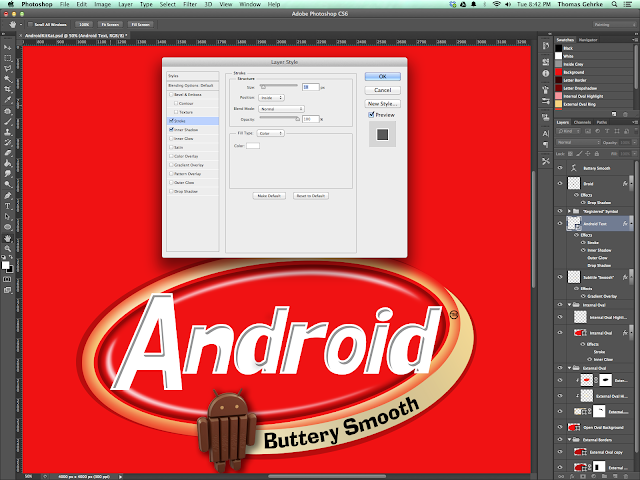 That worked out surprising well!

Next is the black edge on the outside of the letters. Normally I would use the Stroke style for that, but since we've already used it, let's go with an Outer Glow instead. The trick here is to change the Blend Mode to Normal (versus the default of Screen) and to set the Spread to 100%. 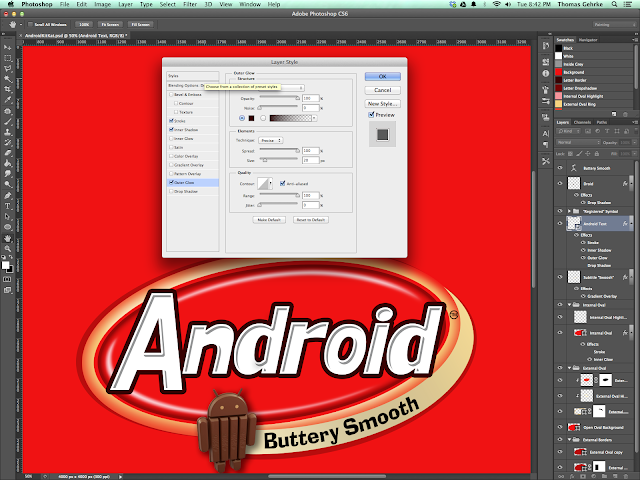 There is actually one issue here. The real logo has letter borders where the corners come to sharp points. What we have done is created rounded corners. I decided that I was OK with that difference.

Finally, the drop shadow where we'll use the Drop Shadow style. The only trick here is to once again set the Spread to 100% for that well defined edge. 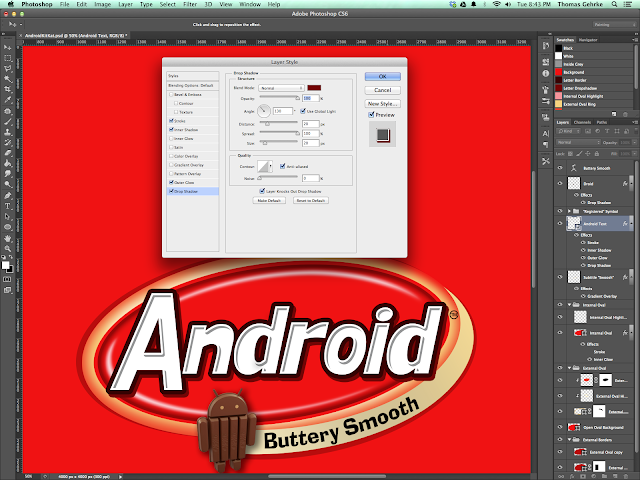 And there you go.

If there is enough interest in the other components, I'll follow up with a part two and show you how I managed the ovals. That might be better suited to a video.

The "Buttery Smooth" typeface I used is called "AdLib". It was the closest I could find to match the "Crisp Wafers" text of the original.