Geek Fitness: Year One By The Numbers 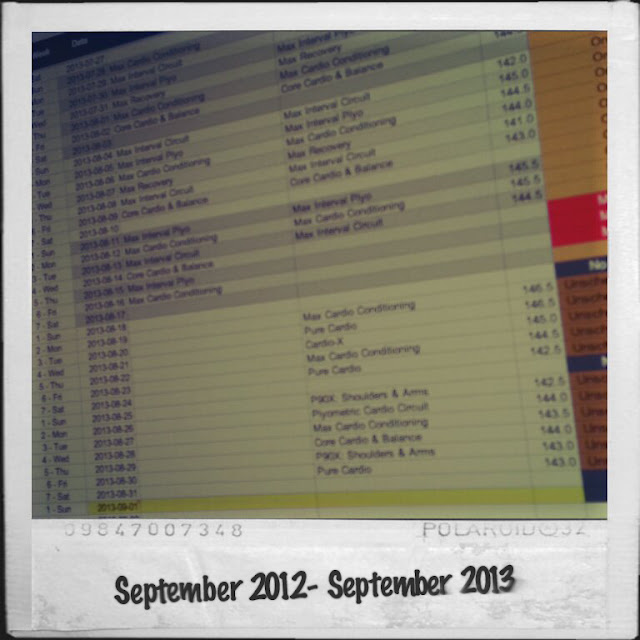 A little over a year ago I started this "geek fitness" thing fully intending to write regular articles with progress, tips, etc. I wasn't as active in posting as I would have liked, but I did stay on the fitness path and have pretty faithfully tracked what I've done.

Because I'm a geek and since I've got some data, let's crunch some numbers. 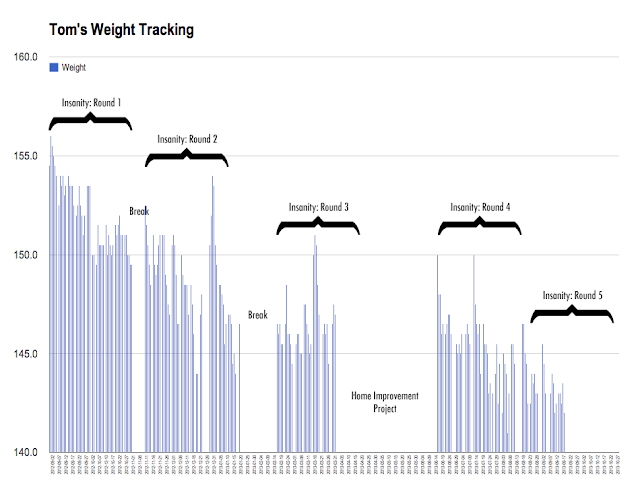 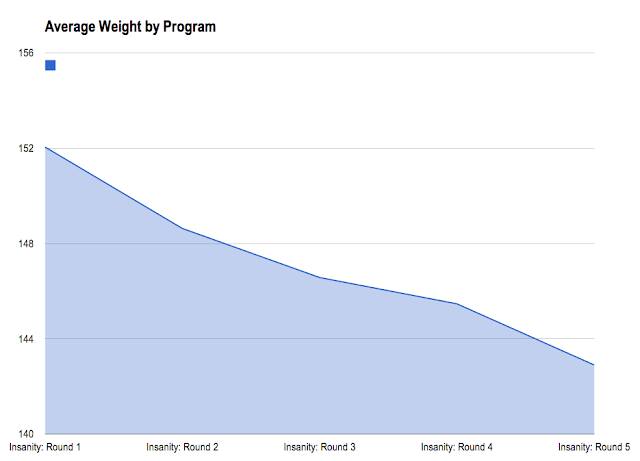 This wasn't really about losing weight, but rather "getting fit". I don't have a target in mind as long as I look and feel healthy. That said, I know what I weighed in my P90X heyday so I can make some correlations since I'm keeping track anyway.

While I tried to hit the scale around the same time each day, there were some day-to-day variances. Even with regular timing, there were some crazy fluctuations. Much like the stock market, it seems to me to be more important to view things over time. Over the year there was a 15 pound difference between my highest weight and my lowest. However, it's the obvious downward trend that seems to indicate "progress".

I hate taking breaks. No, really! It feels like cheating and I can feel myself blimping up for every day I'm not following a program. The body does need time to recover, though, so breaks are important.

The reality is that as long as you don't go crazy with the food and remain at least a little active, you don't lose too much in terms of your fitness levels. I've read that the general rule is it takes about as long to lose your progress as it did to make your progress. The numbers seem to bear that out as show my weight after time off was pretty close to where it was at the end of the previous round.

Sticking To The Program 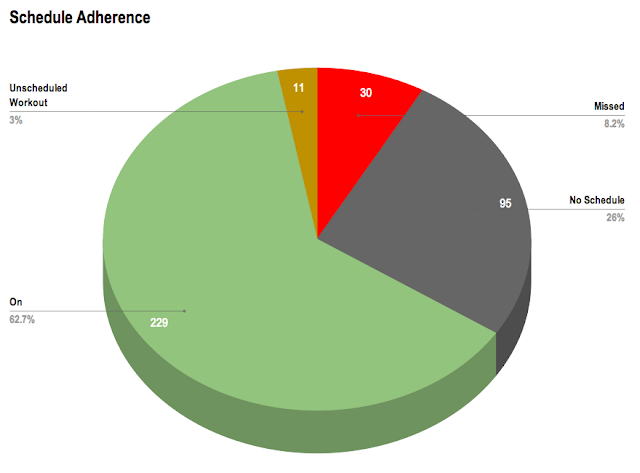 Two-thirds of the time I was on schedule or working out. That's kind of not great. 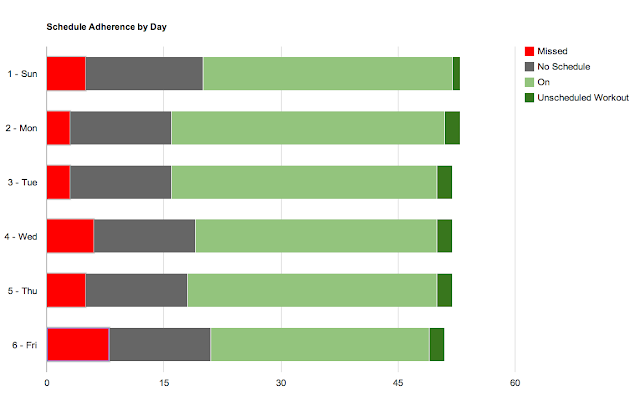 Friday was my biggest day for slacking off. Although it does look like I'm an equal opportunity slacker. 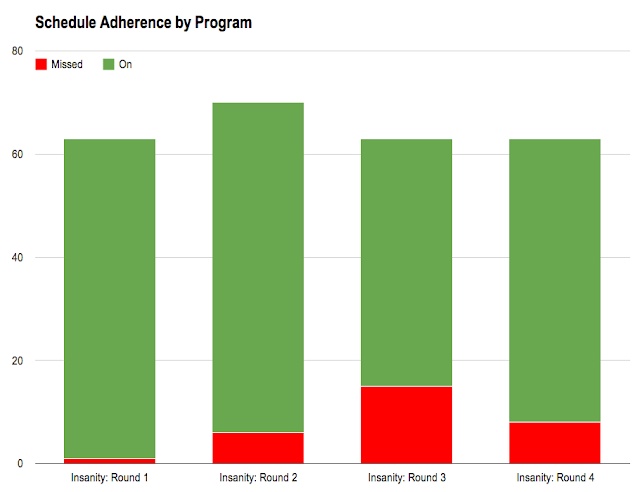 Round 3 was... embarrassing. There weren't even any holidays to blame that on. 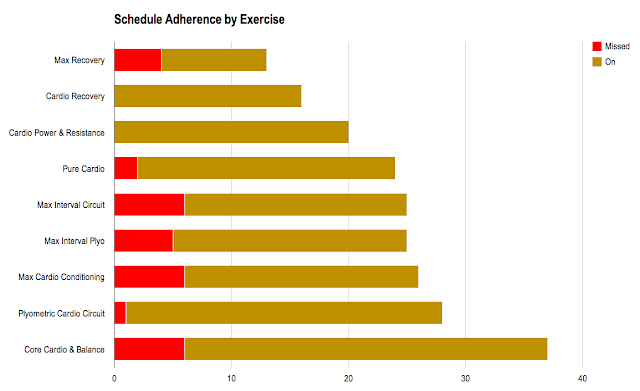 Apparently I never miss a Cardio Power & Resistance or a Cardio Recovery day.

This is the point where you will want to look away since I'm going to "let it all hang out" both figuratively and literally. 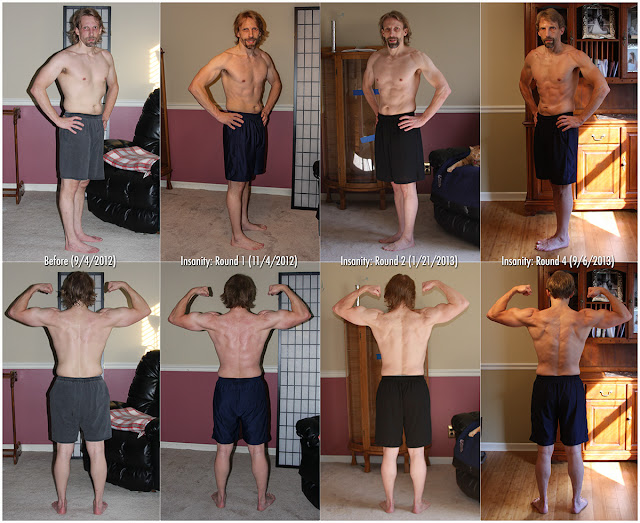 Bleh... I'll definitely never grace the cover of a fitness magazine (or the electronic equivalent).

I Am Not A Salesman


I'm posting these because I'm just a regular geek trying to get fit. I'm not a trainer and I'm not trying to sell you anything. I tried to make them as similar as possible by taking them under the same conditions (after a workout) with the same amount of flexing. Lighting was obviously an issue, but I did nothing to attempt to correct this in Photoshop. Other than cropping and labeling, these haven't been adjusted in any way.

Taking all of that into account, remember that your milage may vary.


Next, you will notice no post-Round 3 photo. That round just kind of petered out as you see above and once I got into the home improvement project, I just didn't feel like it mattered.

ASIDE: Doesn't the new floor, baseboard and paint look good? Quite the improvement! ;)

When I started Round 4, I'd say I was in Round-2-ish shape. Any gains from Round-3 were lost and that pretty much confirmed the "it takes about as long to lose your progress as it did to make your progress" rule I mentioned earlier.

Up until Round 4, I did not adjust my diet. Keep in mind that I do eat healthy as compared to most people and that I did see change. I saw the most drastic changes in Round 4 where I adjusted my diet for results. (FWIW, I lowered my carbohydrate intake and replaced those calories with proteins. That's low carbs. Not no carbs.)

This is kind of a no-brainer, but I do occasionally talk to puzzled people who exercise but don't get results. Most of the time it's because they don't have what I'd consider to be a healthy diet (e.g. a lot of "empty calories").

But what do I know? I'm not a trainer and I'm certainly not telling you what to do. I'm sharing what I've done and how I'm doing it. Maybe that motivates you. If nothing else it might help to know that there is someone else out there struggling with the same things you're struggling with.

I've got at least a couple more articles rolling around in my head. I'm hoping to get those put together for you "soon". Yeah... I know...
geek fitness health