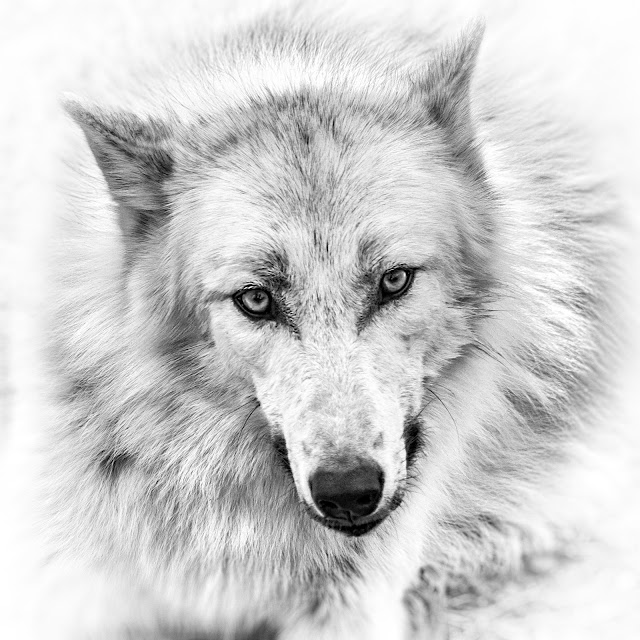 To my surprise, this has become my most popular photo on Flickr in the week since I posted it there. Of course that means that I must pull back the curtain to reveal everything that went into it.

Here is the original shot... 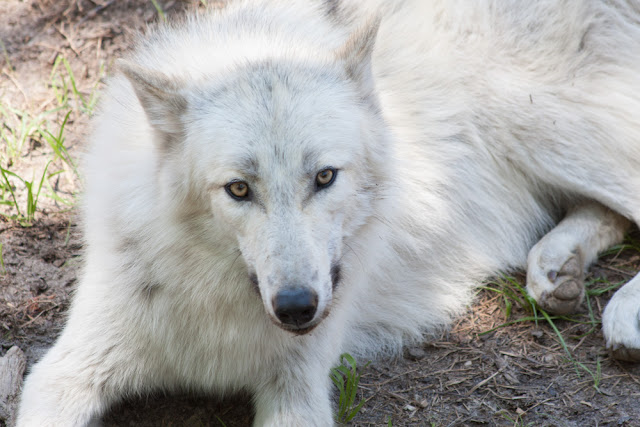 If you're a regular reader of my blog, you won't be surprised to know that I'd passed over this photo many times in the past because I didn't really care for the pose, the dirt is ugly and it looked like the wolf had been rolling around in it.

But I do enjoy a challenge.

Here is what I ended up with after some Lightroom 4 adjustments... 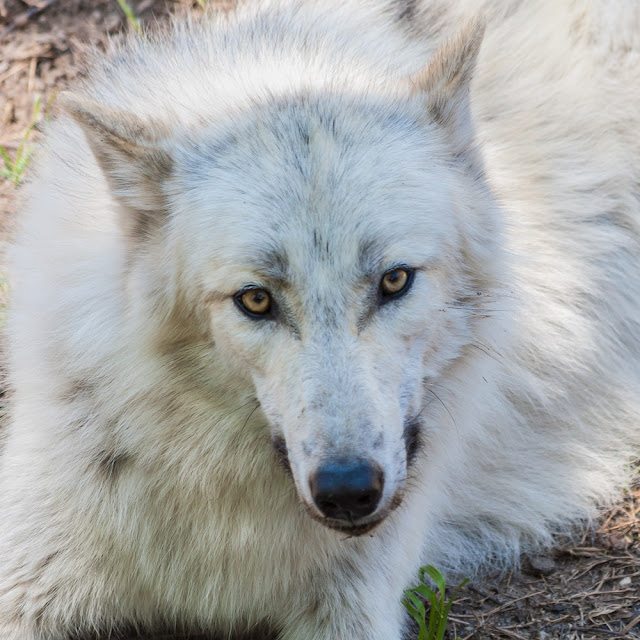 Some fur detail pulled out and cropped to get rid of most of the ground. It should be easier for you to see what remains of the mud pies he'd apparently been enjoying before I got there. 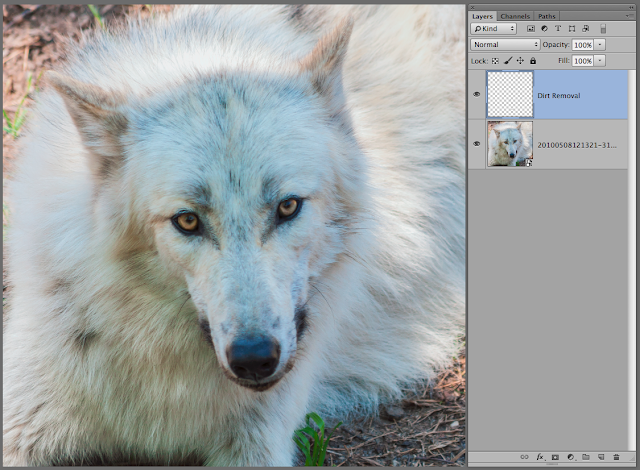 The first step was to remove the dirt. I used the Spot Healing Brush Tool for this on a new layer. 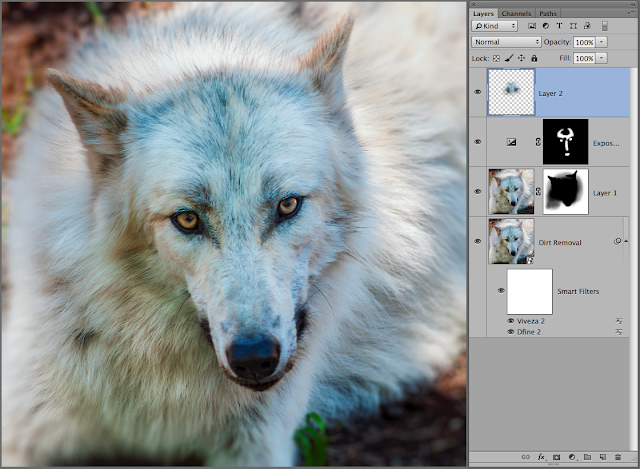 Next, I removed some noise using Nik's Dfine 2 filter. This was mainly in the eyes.

Nik's Viveza 2 filter was used to punch up the contrast and structure.

Photoshop's Iris Blur was used to make the face the focal point and to really start obscuring the ground. I masked out the areas that I wanted to remain sharp.

Using an Exposure adjustment layer, I brightened the eyes, the brows, snout and nose and then finished this step off by sharpening the eyes with Photoshop's Sharpen Tool. 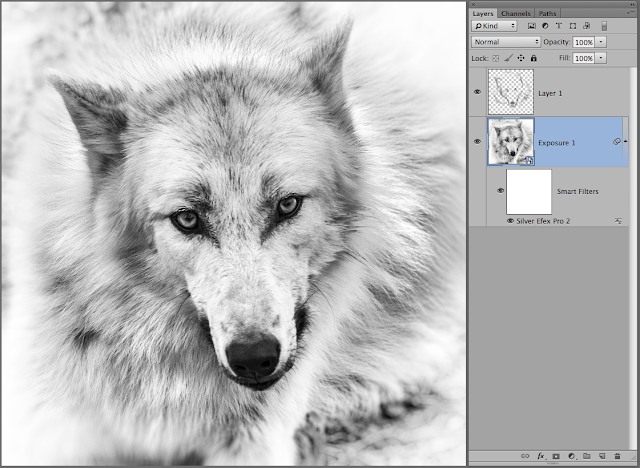 I felt this photo was all really about the eyes and the fur and the best way to tell that story was in black and white. Nik's Silver Efex Pro 2 to the rescue! (I know. It's starting to sound like a commercial. Sorry.)

Here are the settings I used... 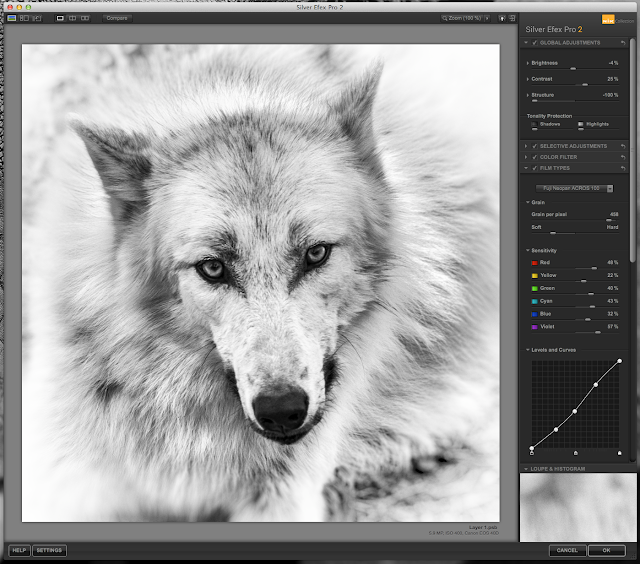 A final touch of sharpening (Nik's Sharpener Pro 3. Shhh...) and some additional white masking to further hide the ground and voila'! 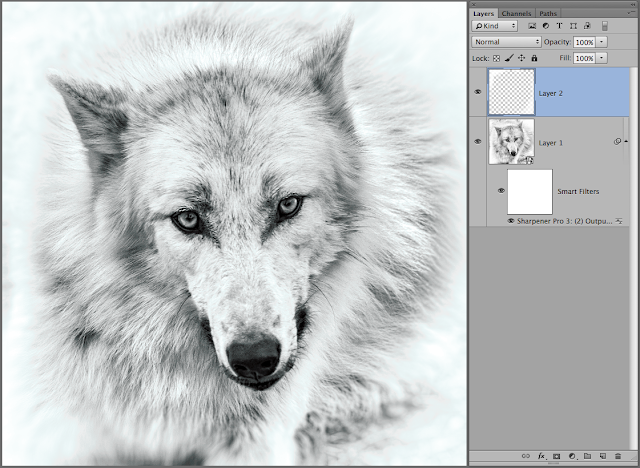 So side by side, here is the before and after...

If you found this at all helpful or just want to say hi, hit me up in the comments below or find me on Twitter or Google+.