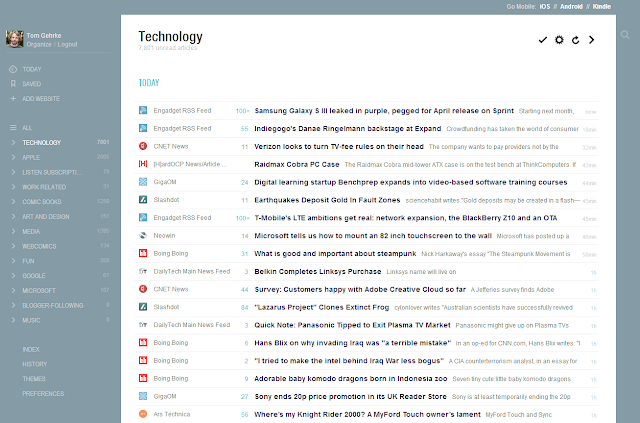 Google Reader is going away. While there are apparently many petitions to convince Google to keep it around, one thing is clear: Don't build your product with a reliance on another company's services unless you have a plan for doing without it.

With that in mind, feedly has been doing everything right.

I've been using feedly as a front end to Google Reader from the very beginning so I am most definitely biased. I like the way it works and I'm used to it. The fact that they had the foresight to plan for a world without Google Reader just further cements them in my mind as a company that knows what they are doing. If you use feedly now, you will likely notice very little when Reader shuts down.

Unfortunately, I keep seeing people discounting the service because they don't like the magazine-like formatting of feeds. While that's the most visually interesting and marketable look, it is not the only way to browse articles.

Rather than reinventing the wheel, I would encourage you to check out feedly's tips for Google Reader users.

It's not the end of the RSS world, people. Au contraire. It's the dawn of a brave new RSS world.
Feedly Google RSS