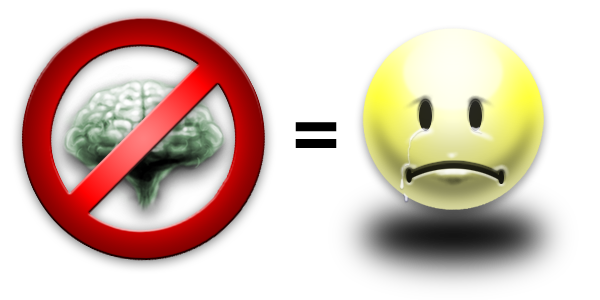 Most people don't like pain and tend to go out of their way to avoid it. But feelings of discomfort serve a useful purpose as they help us identify boundaries by letting us know when we are approaching a limit. If discomfort turns into full-blown agony, we know we've really crossed a line.

The goal is to recognize the warning signs and avoid putting yourself out of commission. The key is to pay attention and keep your mind on the task at hand.

Let me tell you a story. A tale of a stupid man who made things harder on himself and paid the price.

On Christmas eve, a fitness-minded individual... let's call him "Tom" ...was working through the second half of Insanity. He was proud to not be slacking off, sure that others were finding excuses to take things easy during the holidays. However, as they say, "pride goeth before destruction".

"Tom" dutifully set his phone down where he could readily see any notifications and began his workout for the day. Instead of concentrating on the Max Interval Circuit, his thoughts instead turned to...


Being no stranger to back pain, "Tom" realized that if he continued working out, the pain would become really serious. So he quit early and with the exception of shoveling snow out of the driveway on the 26th, did nothing strenuous for the rest of the week.

For the geek, avoiding distractions is easier said than done as our lives generally revolve around finding new and interesting ways of entertaining ourselves. "Dead air" is to be avoided at all costs. Whether music, video, news, email, social updates or any of the myriad other things that generate notifications, having 30-60 minutes of quiet where something isn't playing, beeping, ringing, flashing, pinging or anything at all that grabs our attention is inconceivable.

Do you want to know the secret to safely getting fit? It's a real game changer. I should really charge for this....

Put your phone in airplane mode. Or disconnect your PC's network connection. Or work out in a location without phone, PC or tablet.

You get the idea.

I'm not saying you can't listen to music or use technology to help you get the job done. I'm simply saying that if it keeps you from concentrating on what you are doing at the time, you might want to at least think twice about it. There is a reason fitness instructors are always telling you to focus.

Pain, or at least discomfort, is how the body clues us in on what is going with it. A twinge may indicate incorrect form or overexertion. When you aren't concentrating, you aren't paying attention to form. You are simply going through the motions which not only does not give you the workout you need, but it opens the door to injury.

In "Tom's" case, if he had put his schedules on hold, turned his phone off and kept his mind in the game and on what his body was telling him, he would not have had to put his workout on hold for a week or worry that he might be starting back up too early.

Alright. I admit it. I am "Tom". I know, right?! A shocking Shyamalan-like twist!

People like us use tools and gadgets to do a lot of things; many of them are pleasant distractions. Technology can be used to achieve many productive tasks. It's up to each geek to make sure that the tech we are using is a help and not a hindrance because sometimes the cost of failure really hurts!