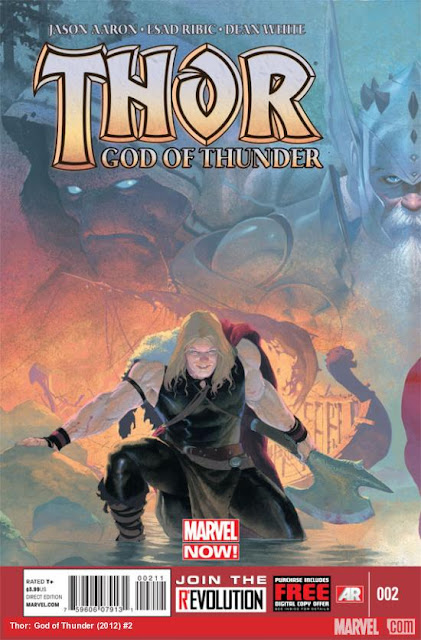 A generally disappointing week with just a couple of bright stars. After having stashed this stack I realize that I must have blocked out my disappointment because I thought I remembered a whole lot more average work. As it turns out dropping quite a few books or giving them one last chance.

Let's get this party started.

I'm not going to complain about angst in a title with the word "teen" in it, but with the exception of the last page, nothing interesting happens. Oh, the origin of Wonder Girl could have been interesting. It wasn't.

I also went back and forth on the art. Sometimes I really liked it, but most of the time, not so much. I might have liked it more if the villain had more spikes. Really? What year is this? 1995?

If the next issue wasn't tied in to the Batman "A Death In The Family", I'd probably drop this book. For now it's just hanging by a thread.

I'd given up on Uncanny Avengers after the first issue and only ended up with the second issue accidentally. Not a happy accident.

I'm sensing a pattern. I did not like Captain America #1 last week. Writer? Rick Remender. Writer for this book? Mr. Remender. He's become the guy with a couple neat ideas that he likes to bury in a pile of not-so-good.

The main villain being a clone of the Red Skull? Good.

Unless the next issue can grab me when I flip through it in the store, I'm done with this one.

I'm on the fence with Talon. I liked issue #0 as an introduction to a character with promise. Then issue #1 was a good setup for the ongoing series. Talon (Calvin Rose) finds a benefactor (Sebastian Clark) with knowledge and resources to team up with his own skills and experience. I was looking for issue #2 to jump into things with that in mind. Unfortunately I don't find Calvin or Sebastian particularly likable or interesting. I kind of see what Snyder is going for, but it's just not hooking me yet.

The artwork itself is adequate. In fact, I think I would like it quite a bit if it were not for the heavy inking by Vicente Cifuentes. I'm not willing to go so far as to say it's bad. It is just a style that I don't care for personally.

Yet another book with one chance left to wow me.

I'm not sure if the Superman of The New 52 is still called the "Last Son of Krypton". That title seems to mean very little considering all of the Kryptonians that show up from month to month.

The story was fine and I am curious to learn more about H'el, but what really keeps me around is Rocafort's artwork. I'd like to see more from him on other projects.

Who watches the Watchmen? Ozymandias probably. He watches everything. All of the time. Reading about someone watching things is not nearly as exciting as one might think. The most interesting part of this issue was to see Jae Lee's rendering of the scene in Watchmen where the Crime Busters first meet. As pretty as Lee's art is, it can't overcome the fact that we've all read this part of the story before.

On the chopping block.

The final issue of this series ends things wonderfully. Story and artwork are pitch perfect.

If you were a fan of Watchmen but passed on this title, then I recommend that you go out and buy all four issues. They should still be fairly easy to find at your local comics shops. I can definitely see people wanting this as a trade.

An excellent follow-up to an equally excellent introductory issue. The story has good pacing with action and plot to be had in perfect proportion. Previously we saw Thor in three different stages of his life. This second installment concentrates on the younger, pre-Mjolnir Thor.

You will notice that I'm including the colorist in the book credits. Great penciling can be ruined by poor inkers and colorists. When all of the artists are good, however, you get something that looks like the inside of this book.

After a week of suck, this was a ray of sunshine. I'm greatly looking forward to issue #3. If you have any interest whatsoever in stories of myth and fantasy, you owe it to yourself to give this series a look.
comics opinion review