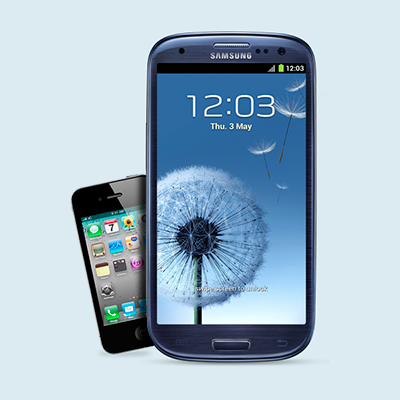 If you are looking for an article that bashes Apple and praises Android or a post that rails against Android while pining for iOS, you can just turn right around and walk away. You'll get no satisfaction from me.

I'm coming from about five years as an iPhone user. I am an Apple fan without a doubt. I've owned every major version of the iPhone, own both a 1st generation and 3rd generation iPads, subscribed to the iOS developer program, installed early builds of iOS and I'm currently working on learning Objective C.

There are no axes to grind here.

Although the home button was unreliable and the proximity sensor had decided to take an extended vacation I continued to limp along with my iPhone 4 while I waited for Apple's annual iPhone announcement. Based on rumors it seemed likely that I would want to investigate other phone options, but I wanted to base a decision on facts instead of speculation.

Unfortunately, the rumors were pretty accurate.


The Decision To Switch

I'm not going to get into the whole iPhone 5 is boring thing. It's fine. Gorgeous even. I'll even go so far to say that it's the best looking and feeling phone available today. I could go on at length at how great it is.

But it is not what I really wanted.

They say familiarity breeds contempt. Now "contempt" is far too strong a word in my case, but you get the idea. I wanted something different and the new phone hardware and iOS 6 were not quite delivering the scope of change I was looking for.

For instance, one of the things that did not change with the iPhone 5 was the width of the device. Many see this is a positive thing because you largely retain the ability to use the phone with one hand. Pretty handy! (No apologies. You should expect puns like that from me by now.) However, the width in portrait orientation was starting to feel cramped after 5 years.

Andy Ihnatko communicated this better than I could...


New on @suntimes - The iPhone 5. So much power, and so thin! I just wish it had one more thing: wideness. suntimes.com/technology/ihn…
— Andy Ihnatko (@Ihnatko) September 21, 2012

My wife was also due for a new phone (so long, 1985 phone!) and she had no interest in an iPhone. Not that she didn't borrow my iPhones occasionally. She found it useful in a pinch, but not something she ever felt she really needed. The two of them just were not a good fit for whatever reason.

Helping a non-geek shop for an alternative has been educational to say the least. What she felt was important didn't necessarily match what her geek husband felt was important. Some things I could guess. Size of the display to ease the transition to a virtual keyboard. A replaceable battery because she hated the fact that I had to charge my phones daily. But NFC? Who knew?

While we didn't go into our search with a need to both get the same device, it turns out that the Samsung Galaxy S III seemed to fit the bill pretty well for both of us.

I won't lie. The S3 feels cheaper to me than my iPhone 4 and that was a slight disappointment. Apple really has cornered the market for phones with that "premium" feel. For me there is just no comparison when comparing glass and metal to plastic.

However, I was talking to a friend of mine who was still rocking an iPhone 3GS and he thought the quality feeling was about the same. Again, I always hated the plastic-backed iPhone, but it does give the Apple aficionados out there some idea of what to expect if looking to jump ship to an Android phone.

I am assuming that because of all that plastic, the S3 is surprisingly light in spite of its Nimitz-like proportions.

Having the power button on the side took some getting used to. No matter how often I press the top of my S3, it just doesn't do anything the way it did on the iPhone.

Aside from muscle memory issues, having the power and volume rocker on opposite sides of the device does not seem like a great choice to me. I have a tendency to squeeze both when I only want to press one control. Then when watching video in landscape mode, I have to decide which control I want on top and to be careful that any pressure on the side resting on the table doesn't accidentally activate that control.

That aside, I do love the screen. (Except in direct sunlight. It's terribly hard to see.)

The camera seems pretty good although I've not done much with it yet.

The speaker is sufficiently loud for my purposes although putting it on the back of the phone was an interesting choice. There are both upsides and downsides to this.

Stock battery life seems to be on par with my iPhone. Maybe a little better. It's hard to say since I don't think I've settled into "average daily usage" mode yet.

The notification LED is also a welcome feature and reminds me of my Blackberry days.

All-in-all, while I really can't in good conscious say that the Galaxy S3 is nearly as sexy as the iPhone 5 (or even the iPhone 4/4S), it's not bad. The extra screen real estate does come in pretty handy on occasion even if you do have to have a full tank of gas to drive from one side of the thing to the other.

Features and hardware are all well and good, but if you can't make the thing do what you want it to do then what's the point?

I found in most cases that if there is an iOS application out there, odds are that there is an Android version. To illustrate this, I put together a table with some of my most used iPhone apps and their Android equivalents with links to both.


I have two major pain points in this area. I cannot seem to find reasonable alternatives for Tweetbot (Twitter) or Downcast (podcasts). I'm split between whether this is due to the strength of those particular applications or a general lack of quality in Twitter and podcast applications for Android.

If anyone has any app recommendations, feel free to give me a yell on either Twitter or Google+. Please.

Sadly, this post has been weeks in the making. Much of that time I've been distracted by my playing with the Galaxy S3. Depending on your point of view that's either a glowing recommendation or a scathing condemnation.

I've also learned a lot and had to make adjustments along the way. I had little to no Android exposure before this phone and that has made this an interesting transition. Some of what I heard from the Apple faithful has been true while other things have been exaggerated. Each person's needs are unique to them and there are no one-size-fits-all solutions. Compromises will need to be made no matter which route you take.

Overall I am pleased with my choice. It has certainly given me a greater appreciation for the strengths and weaknesses in both camps.
Android iOS iPhone opinion