There is no way that this series should not have more views than it does. As of today (September 3, 2012) the first episode only has about a half-million views after slightly less than one month with subsequent episodes falling off pretty quickly. 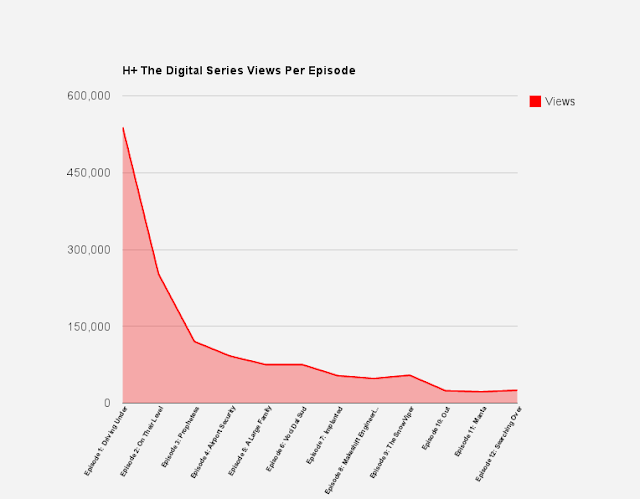 While I can hardly be considered a cord-cutter, I am keenly interesting in content wherever I can get it. To have a series like this, freely available on the Internet, slip through the cracks is criminal.

By "a series like this" I mean that it's smart, well produced, well cast, well acted and well visually effected. (Sorry. Got on a roll there.) This is as good as and arguably better than anything you will find on broadcast television.

Why do I care? Well... I'll admit it. I'm selfish. I want this series to succeed so that years from now we all look back and say, "I remember when people started posting original content to the web and everyone thought it was crazy, but look at it now!" We could discuss it in the same context as other crazy schemes like make people pay for television that doesn't come in over the air or having channels dedicated to music, golf and shopping.

There are three reasons off the top of my head that these numbers are so low.

I don't think most people know about the show. YouTube is just now dipping its toe into the original content business, but I think it still bears the stigma of being that place to find funny cat videos or guys getting hit in the crotch.

It could very well be that the numbers drop because people are not interested in the content. It's a sci-fi drama and not everyone is into that. I know, right? How crazy is that?

The writers really messed up by not including a cat with a computer implant that runs around attacking crotches. I'm just saying.

Bottom line is that each episode is in the 5-6 minute range and there are 12 episodes out right now. It will cost you a little over an hour and let's face it. You were just going to waste that hour anyway by watching something where people hock junk at the pawn shop or someone's sister-wife gets upset for whatever reason that sister-wives might get upset.

Go to the Complete Series page and hit the play all button. If you don't like it after the first couple episodes, your money will be returned to you and you get to keep your memories, free of charge.

The chart posted above doesn't really tell the whole story since each episode is released on a different day. I've updated the chart to include views per day as a comparison. 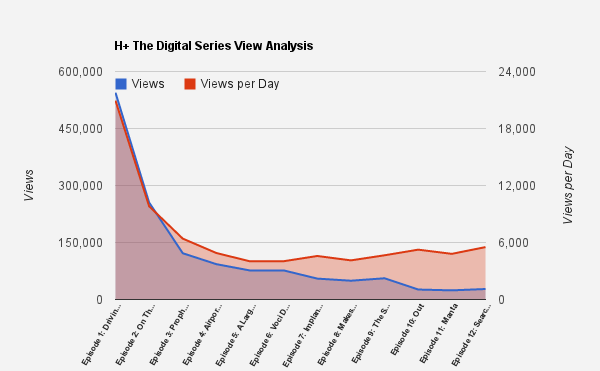 It's also notable that this web series is region locked for some reason I cannot fathom. Last I checked, the US represents only a fraction of the world's Internet accessing population. But whatever.