September 13, 2012
There is a stereotype for geeks that says we are predisposed to being pale, squishy people who prefer to bask in the electronic glow of an LCD than to expose ourselves to that burning ball of nuclear energy that we call The Sun. Picked on by The Jocks. Ignored by The Popular Girl/Guy. Etc. Just watch practically any movie from the 80's for examples.

Does it really have to be this way? Nope! You too, my geeky friend, can be as fit and healthy as anyone. What's more you don't have to abandon your inner nerd to do it!

"What?!" you may ask. "How is that possible? Won't I need to sweat and grunt and jump around like the gym rats do?" Of course you will. Don't be ridiculous! Nothing worth having comes easily. Especially since most of us are starting a little behind the curve.

This post is just the first in a series on how technology can assist in achieving health-related goals. The timing could not be better since I've just started Beachbody's Insanity program. Don't worry, this won't be an infomercial. There are plenty of those out there. Likewise these posts will not dive deeply into what to eat, how often to exercise or topics that are more than adequately covered elsewhere.

I will simply be sharing what has worked for me and how I've used technology to motivate myself and remove some of the excuses we all use for giving up.

Who am I and why should you listen to me? I am you. I've been there and I've gotten results. 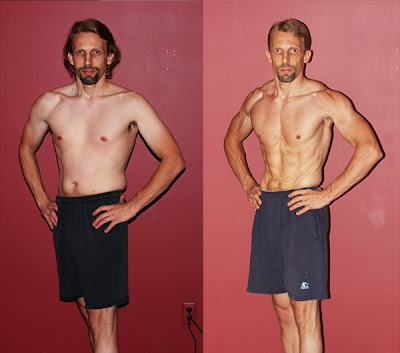 As embarrassed as I am to post these pictures, I hope it helps you to understand that change is possible for everyone. What you see was 9 months worth of P90X.

(I was debating over posting these pictures but one of my Twitter pals posted a before/after of her results and I realized just how motivating it can be to see someone else's successes. She and her husband are two of the people who encourage me almost daily by posting their progress online. So thank you, Kristen and Eric!)

Now full disclosure. That final picture was taken 3 years ago (I was 39). Since then I've let myself go a bit. I probably fall somewhere in between those before and after shots now. The habits I made during that period I've carried forward as far as diet goes, but I've had some injuries that have slowed me down as well as a general loss of focus so the exercise part of the equation has dropped off in intensity.

It's time to put excuses aside and get back on track and that's what I plan on sharing with you.

I'll also do my best to keep the shirtless shots of me to a bare minimum.
Beachbody exercise geek fitness health Insanity P90X