June 25, 2012
I'm still waiting for that perfect iOS email client. For me, Gmail provides the service and since I also fully buy into Google's way for managing my correspondence (labels vs. folders) who better to provide a corresponding app experience that works the way I want to work than Google, right?

Google just released an update to the Gmail app for iOS that adds notification support. This was a huge step forward and a welcome update. Some would argue that it's long overdue. Initial reactions seem pretty positive and I don't disagree.

But why does it have to be so darn ugly?

I always imagine that Google employs a single, itinerant designer who travels from project to project, providing input into products that get released to the public. If they end up being not as completely hideous as they could be, they still tend to be light-years away from beautiful. Maybe I'm being overly critical considering that I'm not a designer myself.

But that never stopped me from complaining before so here's my problem: 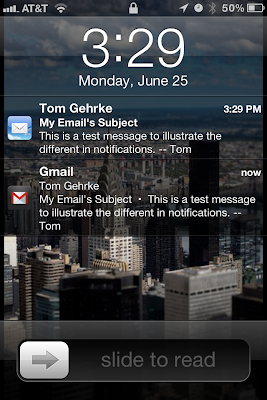 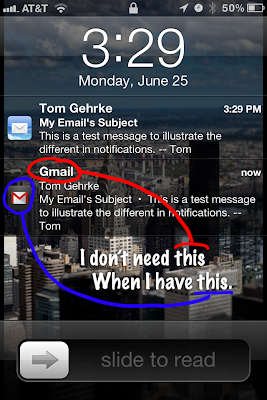 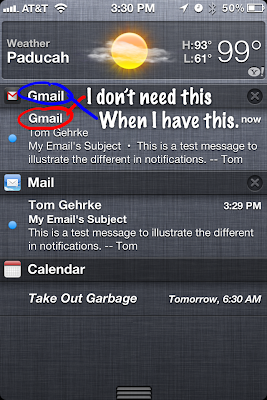 Is that such a big deal? Probably not. But the fact that Google doesn't seem to think it's a big deal is a big deal.

My issues with this are that there is no prominence for the subject or sender. The font used for Gmail's notifications is the same size for every piece of information making it more difficult to parse. I should, at a glance, be able to determine whether a particular piece of mail needs to be read now or ignored and possibly addressed later.

Making it even more difficult, the message body starts immediately after the subject with only a bullet to separate them. This was probably deemed necessary because an entire line is wasted by the app's proud declaration that each and every message notification is being provided by "Gmail!".

Oh! Sparrow! Where are you with your design sense and slick UIs. If only you had been the one to finally offer notifications. But you haven't even given us push email yet.

It's actually not all bad. There's an iPad version of the Gmail app (unlike Sparrow *ahem!*), message searching works well and there are some neat features like being able to add a doodle from the email composition form.

Since I mentioned Sparrow (twice), I thought a comparison among what I consider to be the three main iOS email contenders might be of some interest.

Gmail and Sparrow both give you the option to select Unread emails only. Not so with Mail.