Dear Verizon, Best Buy or To Whom It May Concern...

April 03, 2012
First let me say that I know I may have brought this on myself. Maybe I should have known better. You be the judge.

The afternoon of March 16, 2012 finds me walking into my local Best Buy with plans for purchasing a new iPad. I know exactly what I want: new iPad, black, 32GB on Verizon's network. They pull one off a stack and then ask me if I want them to activate it in store.

Like a crowd watching a horror movie some of you are yelling, "Don't do it! Don't go in that room! There's an axe wielding maniac in there!" You are not far off.

For the record, I know how to activate iDevices. I have a first generation iPad and I have had several generations of iPhones. But because I knew I was not going to be going straight home and since I had time to kill, I figured I would go ahead and let Best Buy do its thing. I thought this was going to be a value-add type of service. Kind of like a car dealer offering to wash your car before you drive it off the lot even though you are perfectly capable of cleaning it off yourself.

In hindsight, I find my lack of cynicism quite disturbing.

I sat around for a while, answered a few questions, signed a couple of pieces of paper (which I obviously did not read closely enough) and left the store $773.79 poorer, but with an iPad ready to go.

Once I finally did get home, it was time to play. The first thing I wanted to do was to figure out how to manage my data plan as I had on my first generation AT&T iPad. It told me that I could not manage my subscription on the device. I let it slide thinking that maybe the system was overloaded or my "paperwork" hadn't gone through yet.

After a couple of days, I got online to see if others were reporting similar problems. Strangely, it was largely those who bought and activated through Best Buy. This involved the payment of a $35 activation fee.

Yep. I paid $35 to have someone do something that I could have done myself in just a couple of minutes. I figured that was my punishment for being lazy and/or stupid. It was only the start.

A Cry For Help

Almost two weeks later and I've exhausted all of my online research. Nowhere did I see where anyone had resolved the situation to their (or my) satisfaction. I did what any well-adjusted nerd would do. I started complaining on Twitter.

I have to give Verizon some credit at this point. They do keep an eye on the Twitter and the next morning they reached out to me. I was hopeful. Once again, my cynicism failed me.

I seem to have had a hard time communicating the issue in only 140 characters a post. Either that or my support person started his/her weekend right after lunch. I let it go the weekend and hearing nothing, revived the conversation. Here is how things went: 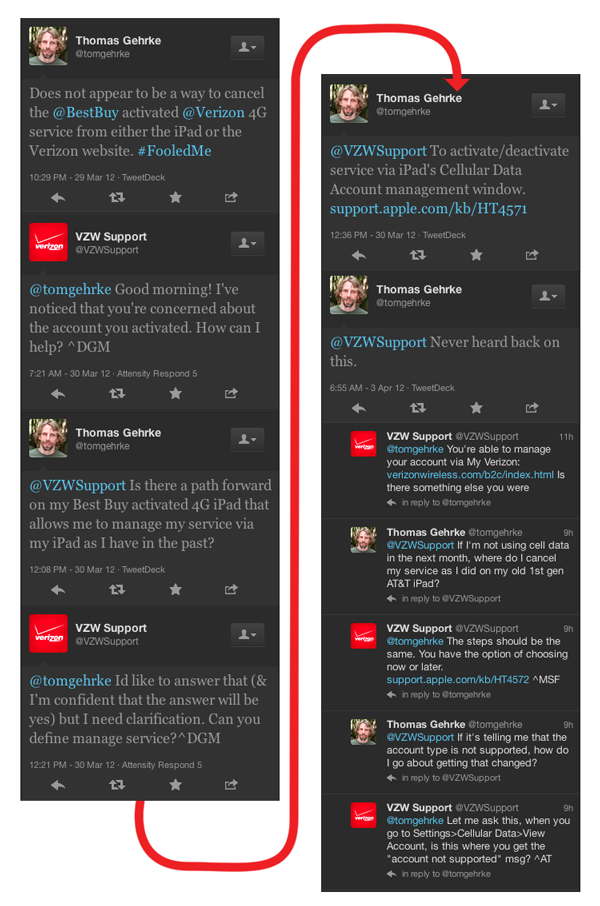 So the first response I got with an actual attempt at a solution was to go to the My Verizon page. Not only had I tried this before, it really does not address the core issue that I want to manage my service by the Cellular Data Account management dialog on the iPad itself (http://support.apple.com/kb/HT4572).

This is what you would see if you went to the Verizon site:

Nowhere is there an option to turn the data service off. I looked. Frantically after a while.

When I pointed out that I wanted to manage things from the iPad as I was used to doing in the past, I was told that I should be able to do that by the Cellular Data Account management window. I feel as if I am making progress now.

It's time to restate the crux of my issue which is that my iPad will not let me do what I am being told I should be able to do for a reason that is noted in the knowledge base article that Verizon themselves listed. My account type is not supported.

I am then asked where I get this message.

So close! I'm feeling love for the person on the other end of this connection. Alas, it's more likely just a case of Stockholm Syndrome.

Getting the Story Straight


It appears that I have been communicating with at least three different support people via a medium that only allows for the briefest of messages. Thus, I have turned to my long-form communication tool (shut up about your "email" or "phone" or "face to face" nonsense).

This is the story.

On my old, decrepit, first generation iPad running on an "inferior" network (I'm assuming this would be Verizon's point of view), my experience is thus: 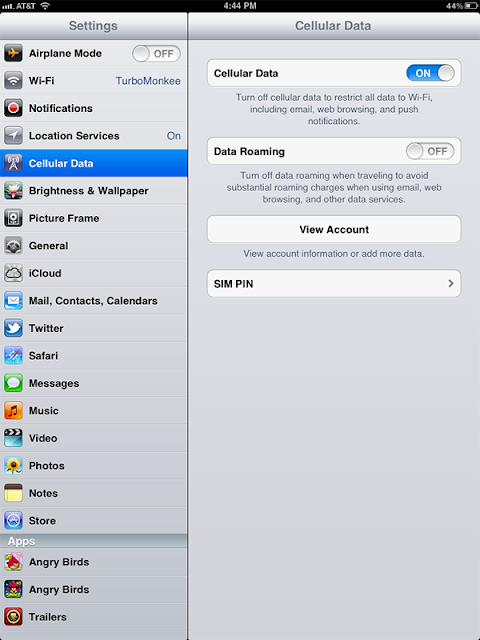 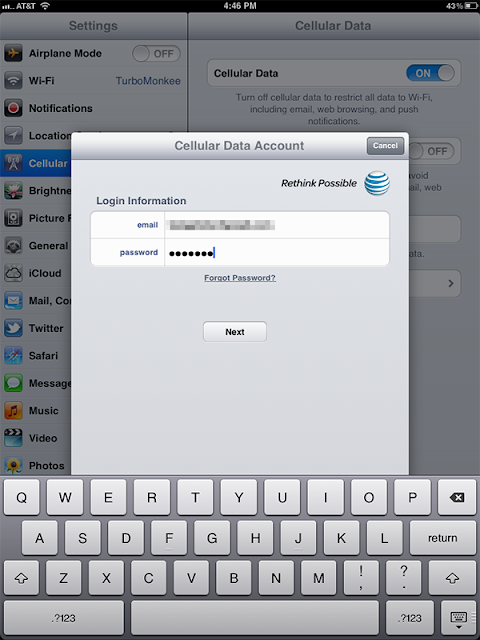 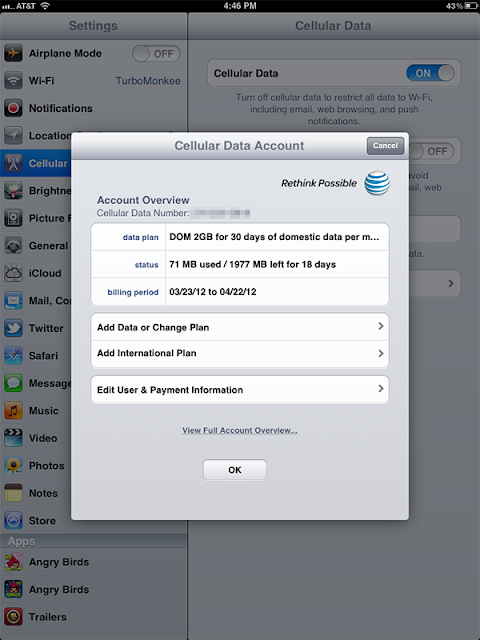 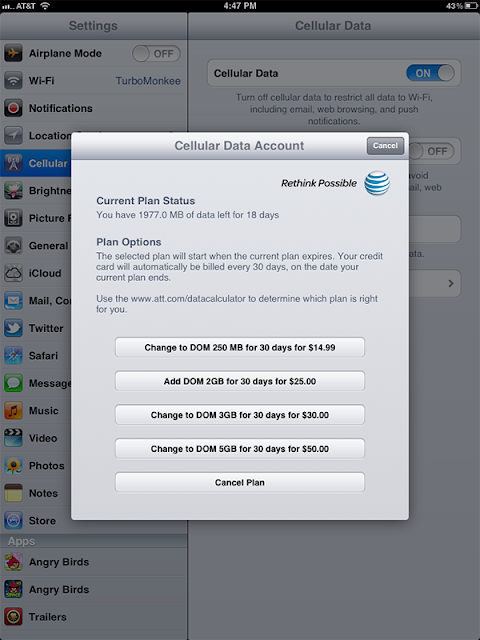 On my super, neato-keen "new iPad" running on the nations fastest network, this is my experience: 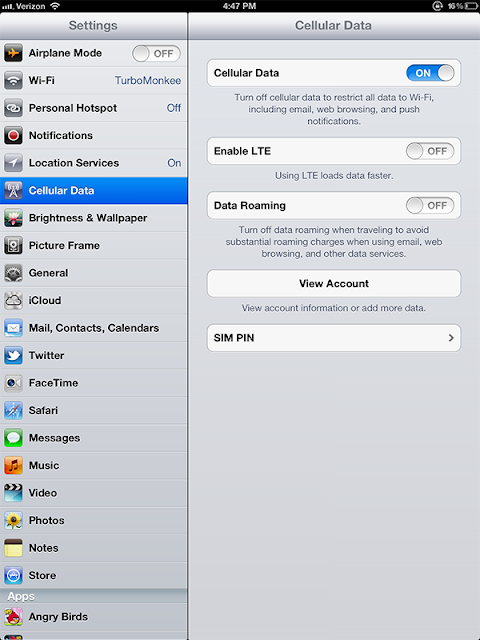 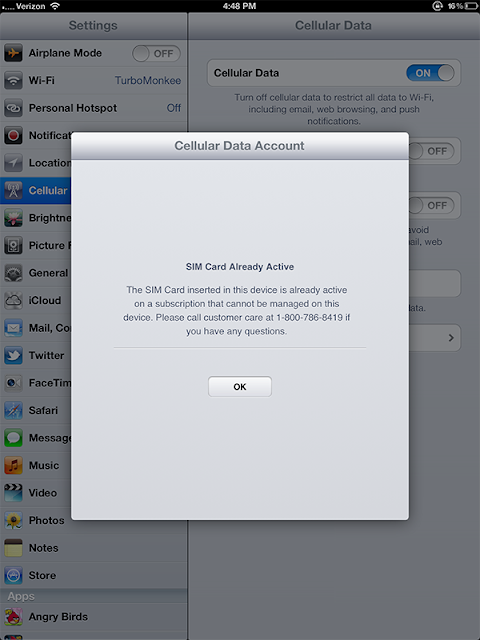 I would really, really like my new experience to match my old experience. The first step to reclaiming my sanity is to just find out if it is at all possible to get from Point A to Point B.

Please, if you know the answer to this question (and subsequently how to get from Point A to Point B), I would love to hear from you. I might even give you a hug. I'll definitely mention how helpful you were in the conclusion to this post.