Love For The Guys At PC Gamer Magazine 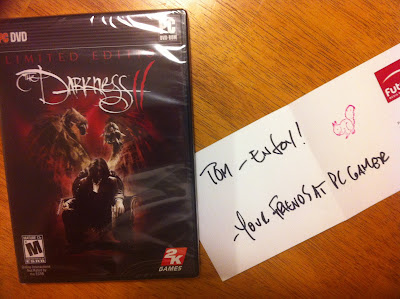 So last September-ish I'm watching NSFW which is this crazy show on the TWiT Network and they had the guys from PC Gamer on. I laughed, I cried (because I was laughing so hard) and figured I would follow them on Twitter. Why? Because they entertain me.

Here's the show. If you're not into mindless, juvenile fun, you'll probably want to skip it.


At any rate, I will occasionally try to post something witty in response to an amusing post. I've been likened unto the neighbor in a sitcom that shows up every now and then. I hope I'm the one that pops his head in and they crank up the canned applause instead of the other one that just causes everyone to groan and change channels.

Either as "hush money" or because I was just entertaining enough or because I said something at just the right time, Logan decided to send me a copy of Darkness II. Honestly, I know little about the game, but I'm definitely down with free stuff. I just installed it tonight so we'll see how that goes. My thanks, regardless.

So if you're into PC gaming, both the site and the people who work there are top-notch. If you want to find out more, hit any of the following links: