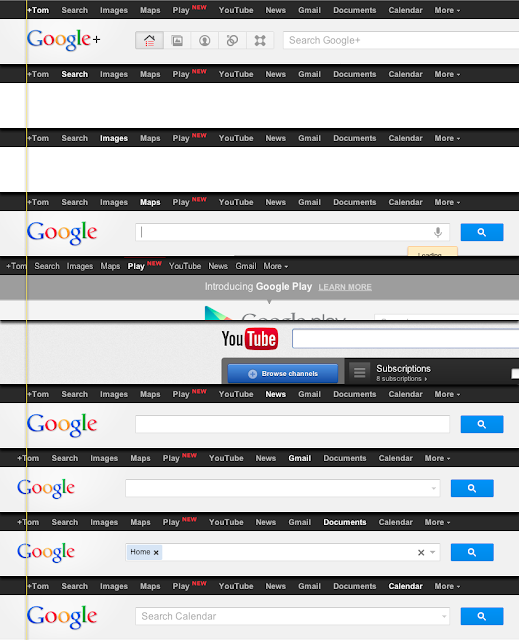 This is the kind of thing that drives me crazy and when I'm done picking nits I imagine that most of you will look at me like I'm insane. So be it.

My OCD alarm tripped yesterday when I noticed the new "Play" link in the Google "menu". I don't really care for the "NEW" link next to it. The red text on a dark background bothers my eyes. But that's beside the point. When I followed the link to see what "Play" was all about, I noticed that the Google menu changed.

And there it is. That's the look that I knew you would give me.

I am a stickler for consistent user interfaces (UIs). One of the many complaints I've consistently had with Microsoft over the years is how the same task is performed differently depending on which of their products you use. It was not uncommon to hear me wondering whether any of the Microsoft development groups talked to each other. I tend to wonder very loudly.

The menu on the Google Play site is just so very obviously different that it was really jarring when it came up. (Again, keep in mind that we're talking about someone that's anal retentive about some things.) The Play team obviously felt that they wanted links to show up closer to the left-hand margin. I guess that might make sense if you wanted to cram more links into that bar, but they made two other changes that obviate the need for that. First, they only use a bold font for the "active" service ("Play" in this case) and then they don't include links to all of the same services that the other sites do. Obviously nobody needs direct access to Documents or Calendars from Google Play.

Presumably "Play" is their most recent property. Since it comes after everything else, why can't it match? Does it represent a future standard or is it just sloppy?

I figured I would see how all of the other sites lined up. Literally. Here's the breakdown:


Does any of this matter? Maybe not. But if the goal is to give the impression that we are using some unified Google service, it's little things like this that will cause some of us to question just how well integrated this ecosystem is. (Sorry. Mandatory buzzword inclusion.)

Those of you worried about how Google is going to share your personal data on the back end should be encouraged. If the attention to detail on largely cosmetic concerns is lacking, one wonders how well the various teams exchange data behind the scenes. Of course, when it comes to Google's bread and butter, I imagine they're making sure the "right" details are getting the exactly the correct amount of attention.
complaint Google UI