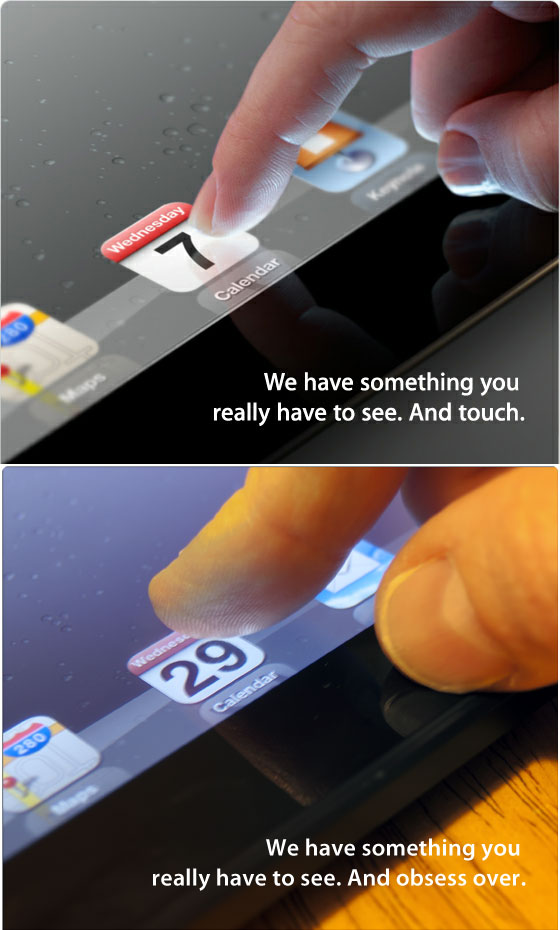 Sometimes tech pundits drive me crazy and Apple-watchers can be some of the worst offenders. (For the record, I am an Apple fan.)

Announcements went out to the press and, as usual, everyone goes crazy. Not without reason. Apple releases are Big Newstm and it's not unheard of for them to sneak little hints of what's to come into these emails.

Everyone expected an iPad 3 (or HD) announcement. The picture seems to confirm that. But then... what's this?! The next iPad does not appear to have a Home button!

Could the pictured device be in landscape mode which would put the Home button on the side? Apparently not based on the icon spacing (so I read).

My thought was that it could simply be in portrait mode, but upside-down (the Home button would be at the top). To illustrate, I thought I'd throw together a quick demo.

I don't have big hands so whoever Apple is using in their picture must have tiny hands. Wow!

The edges of the text in the Apple photo is smooth and sharp. A retina display seems to be a lock. (No big shocks there.)

I'm not sure that the icons are the same size. Obviously they would not be in terms of total pixels if the resolution of the display has doubled, but assuming everything had scaled equally, the "physical" size should be the same. I have two reasons for thinking that something might be off.

First, using the drops on the background as a guide, things just don't quite line up. 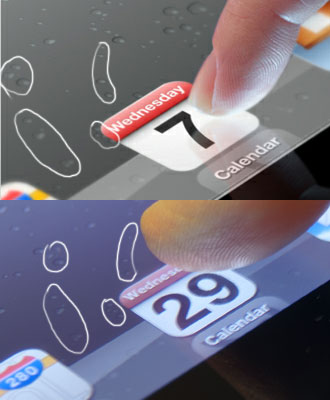 The arrangement of drops at the upper, left-hand corner of the Calendar icon just about touch in the new iPad picture, but on my version, it's not nearly that close. The new icon would seem to be larger.

Admittedly, it's quite possible (and even likely) that the wallpaper is not exactly the same and that's the difference. Particularly since height-wise the icons seem to be about the same.

My second reason is that my finger can't be that huge as compared to the model's! Can it?

The bezel seems larger on the new iPad. Again this is down to a comparison of my thumbnail to the model's entire thumb up to the first knuckle.

The edge of the new iPad seems pretty dark where we see the back cover. If this is indeed in a portrait orientation and upside-down, this would be where the 3G (4G?) antenna would be which would make that edge material a black plastic. It does not look like the light aluminum edge that I would expect.

Of course, it could just be the lighting. I mean, why would Apple marketing go to the trouble to flip an iPad upside-down to avoid getting the Home button in the picture, but then also grab an iPad with cell service and that ugly, plastic piece?

That's really the bottom line. We don't know. The speculation is fun and interesting up to a point. When a single picture gets an almost Zapruder film like analysis, things start to edge toward the absurd.

I guess the upside is that this is way more interesting that discussing who is suing whom over what patent now.
Apple iPad opinion