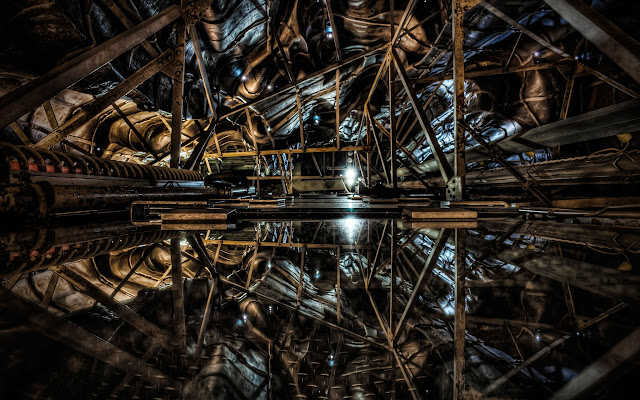 Everyone has seen pictures of the Statue of Liberty from various angles, but one view that most people probably do not think much about is the view from inside. The statue is essentially a hollow, copper shell. This is a fact that probably does not enter the minds of most people. And if it does, it is hard to imagine what the inside might look like.

Access to the interior has been hit or miss over the years for various reasons. We were lucky enough to make the trip to the crown before visitor access was shut down again on October 29th, 2011.

A spiral stairway is the way to get to the top of the statue. It's a long, steep, tight trip. I enjoyed it immensely, but it's not for everyone. The staircase is enclosed in a square column of glass to keep you safe should you need to take a break at one of several small landings. The photo you see above was taken from one of these landings.

I held my camera through a gap between the glass panels and pointed it straight down while firing off a bracketed set of shots. The plan was to get as much of the framework, scaffolding and "skin" as possible. As luck would have it, the glass provides an almost mirror-like surface which really doubles the complexity of the image and makes it seem more complete. (In reality you are only seeing about a quarter of the internal structure.) The diamond plate floor of the landing shows through the glass at the bottom of the picture for some additional texture.

With three exposures (-2ev, 0ev, +2ev), this is another HDR photo. I made an effort to keep things looking more natural while taking advantage of be able to see structure in what would otherwise be deeply shaded areas.

It was a fascinating visit and I highly recommend going to the statue for anyone in the vicinity of New York City.
HDR New York photography Photomatix