U-Turns - Four Lessons From An Idiot 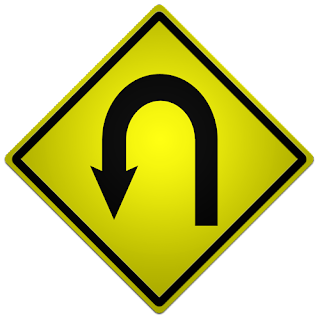 I had planned on posting a new photo from my New York trip this morning, but instead you get me talking about the mistakes I've made in the past day. I know, I know... it's hard to believe.

What? Why am I doing this and why should you care?


As to the first question, it's because I can. Nobody makes a better target for me to ridicule than I do.

Should you care? Well that just depends. Hopefully you are all smarter than I am and never make the same silly decisions that I do. But on the off chance that you might be tempted to follow in my foolish footsteps, consider this a warning.

When I got home from work yesterday, I pulled up my collection of photos from New York, picked a shot that I thought would be fun to work on and then dived right in. And just kept on diving. After several hours (Probably. I lost track of time.) and with great satisfaction, I kicked off what I planned to be my final edit before calling the photo complete.

How right I was.

The last task was to apply a CPU-intensive filter to the entire image that would not have altered its appearance greatly unless viewing it at full size or having a print made. The progress window appeared... and then disappeared. Uh oh... did it finish? Sometimes I have to click back into Photoshop for the image to refresh. I'll try that.

(The "bong" is the Mac's default alert sound, "Funk". Yeah... I know what you're thinking. For those who have never had the pleasure of a Mac telling you how badly you just screwed up, click here to grab an MP3 version of the file and then loop it.)

Specifically, any input which might result in saving the file I was working on.

A file that has not, in its lifetime (and this is where you take notes), ever... been... saved.

Yes, you read that correctly. I went several hours without saving my work.

LESSON #1: Save your work FREQUENTLY. If you think you are, you aren't. Trust me on this one.


(Nobody mention Mac OSX Lion features to me, please. Until Adobe implements support for Auto Save and Versioning in Photoshop, pointing out the fact that those things are built into the operating system is just rubbing salt in my wounds.)

Well, I hadn't eaten yet and it was getting late. I thought a break would be in order after which I would return to my desk and start from scratch. Odds are, now that I had been through the process once, my second attempt would be done more quickly and with better results. That's how it usually works.

How right I was.

In a mere fraction of the time (probably about 2 hours) I had something that was superior to my first attempt. Superior in more than a This-File-Actually-Exists-On-A-Hard-Drive kind of way.

But it was late and I hate posting things at the end of the day. I decide to head to bed and post it first thing in the morning.

That would have been this morning. I got up, showered, dressed and pulled up the picture I had been so proud of the night before.

Sadly, I still recognize that this second version, as bad as I think it might be, is still better than the first, never-saved version. It is at this point that I realize that Photoshop probably did not crash. I think it was actually trying to save me from myself by saying, "Look, friend, I know you have put a lot of time into this thing and I think it's cute how excited you are over various aspects of your little picture, but... truth is that I can't let you do this. Give me the keys. You have had too much. You're done here."

Friends don't let friends Photoshop garbage. If it looks like an overly processed HDR photo, then it probably is.

So I started from scratch a third time.

LESSON #2: Never let the fact that you have invested an inordinate amount of time creating something stop you from starting over once you realize it's no good. Face it. Crap doesn't get better with age like a fine cheese or wine.


(Nobody mention Casu Marzu (maggot cheese) or Ttongsul (Korean wine made with feces) in an attempt to make some sort of counter-point. You're wrong. End of subject.)

Since this was all done before work this morning, my time was limited, but in about 10 minutes I already had something better than the previous two versions. Definitely something that I could build on later when I had more time.

I then decided to write this all down because...

LESSON #3: Never take yourself so seriously that you fail to find the humor in your own stupidity.

LESSON #4: Always be willing to prove to others how ridiculous you are. Especially if there is an opportunity to entertain, educate and/or motivate.
humor tip