When Life Gives You Lemons, Photoshop Them

July 19, 2011
Yesterday I posted a black and white, HDR photograph of the cockpit of a Boeing 737. It's definitely not my best work, but I like how it turned out. Particularly in light of how it started.

While waiting in Terminal C at BWI for my flight, I pulled out my Canon 40D. I'm pretty shy when it comes to taking pictures in public and doubly so in an airport so I am rushing. Airports are great spots to find subjects well suited to HDR photography and I quickly set my camera up to take 3 bracketed shot bursts at 0EV, +2EV and -2EV. Here are the results from one of those bursts.

I know. Underwhelming isn't it? This isn't even what I would consider a good representation of three photos intended for HDR use. All of them are very flat. There isn't really much differentiation in the details among them. I was terribly disappointed.

But after shoving these into Photomatix and twiddling some knobs (sliders actually), I ended up with the following tonemapped image. 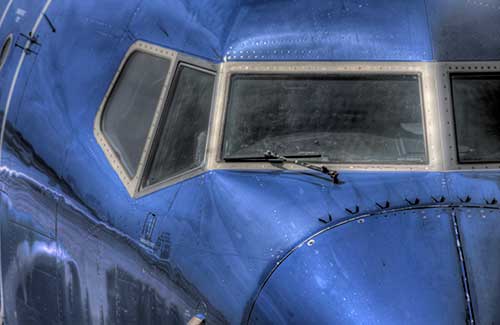 Things are looking up.

What I'll do now is step through my Photoshop edits. I tend to make a few changes and then compile those into a Smart Object, make more adjustments and so on. It's my way, for better or worse. The upside is that it makes showing a progression of steps a little easier.

The first thing I did was to apply a Topaz Denoise 5 filter. With more extreme tonemapping, image noise seems to be more pronounced. I like to take care of this as early in the process as possible.

Add a Curves adjustment to increase the contrast and then a Black and White adjustment layer using the Blue Filter setting and set to 40% opacity and we end up here. 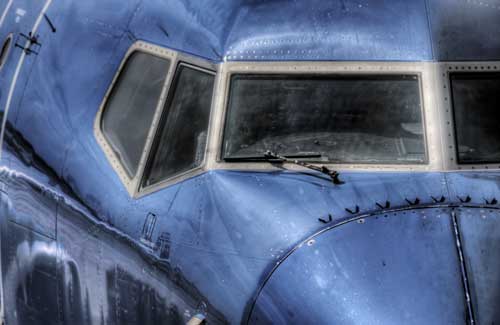 Next, I wanted to do some... light-shaping. I'm sure there is some technical term for it. It's basically doing some burning. I like to use Exposure adjustment layers for this and use both the exposure and gamma correction sliders. 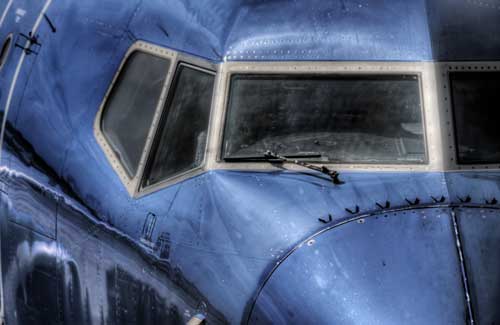 In general I am happy with how things have been going, but I'm not really happy with the coloring. The colors are kind of bland. It really looks like a black and white photo that someone has started colorizing. To me, it's distracting from what I feel is the most interesting aspect and that is the reflections. Let's take care of that.

A full on Black and White adjustment layer using the High Contrast Blue Filter does the trick. I amp up the contrast a little more with a Curves adjustment layer and make a couple of areas  "pop" with another couple of Exposure adjustments masked to enhance the "shine".

The windscreen was not as clear as I would have liked. Again, I found it distracting. I sampled a darker area of the window and then painted over the light spots, finishing things off by dropping the opacity of that layer slightly to make things look more natural. 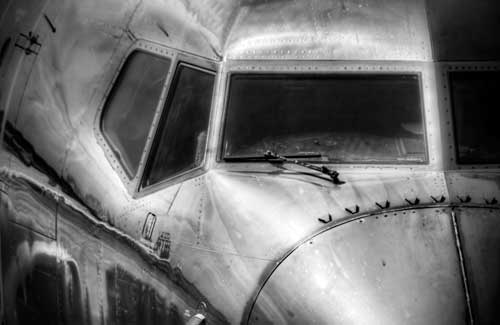 We're almost there. Some finishing touches and it's done. The usual filters to pull out and sharpen up some details (Topaz Adjust and Topaz Detail). A Photo Filter adjustment layer to add a little blue tint to give things a more "silvery" look and the introduction of noise gave it a film-like quality (in my mind).

Once I added my signature vignette (I know. You either love them or you hate them.) and I felt as if I'd salvaged something that was completely uninteresting and boring and ended up with something that I actually kind of like. 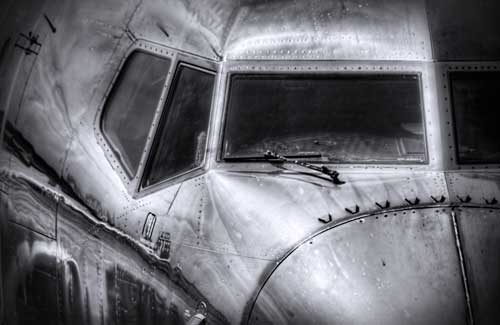 Granted, this won't likely win me any awards and while I hope you like the final product, what I would really like you to take away from this is that you get out of things what you put into them. I should have put more effort in on the front end by making sure the photos I took were of higher quality. The fact is, I had to work much harder afterwards to get closer to reproducing what I saw in my minds eye initially.

Finally, regardless of where you put the effort, remember to stop, think about what you're trying to accomplish, have patience and then execute. Don't be discouraged if it doesn't work out as well as you hoped. Learn from your mistakes and keep at it. I am a better photographer today than I was last year. While I have a very, very long way to go and have a lot more to learn, I'll keep hacking away. I hope you will join me.
HDR photography Photomatix Photoshop tutorial