April 08, 2011
This is the second installment of articles that describe a script-based method for creating backups at the site-collection level.


In part 1 I shared a script with a relatively long list of arguments that creates backup files for each site-collection in a web application. Since you will likely have more than one web application, we can simplify things by creating a CMD or BAT file (hard core, right?) that accepts only two arguments. These are things that will change for each web application, with the other script arguments likely being the same for each backup job.

Keep in mind that you will want to adjust file/path names.

Now with this in hand we can create a scheduled task for each web application. What I do is set the Program to run as CMD with the following arguments:


So the argument breakdown is: 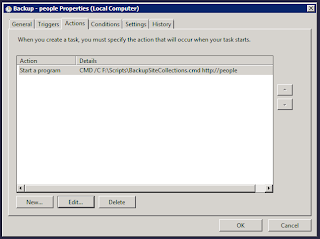 Set up a task to back up each web application. 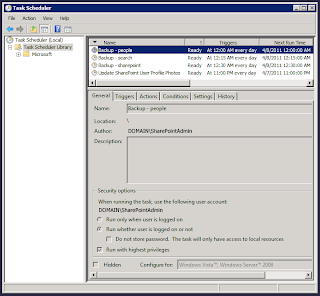 Have the tasks run as the farm administrator and allow them to run with highest privileges whether the user is logged on or not. When these run, you should see SCBackup (for Site-Collection Backup) files being created in your target share/folder.

The final part of this series will describe what I do to handle backup reporting and notifications.
backups scripts SharePoint