One Reason To Love The Netflix

March 24, 2011
Let's be realistic. Companies and services have problems. It is going to happen sooner or later. Obviously you don't want it to happen very often, but when it does the mark of a great service is how they deal with their customers.
Enter Netflix. 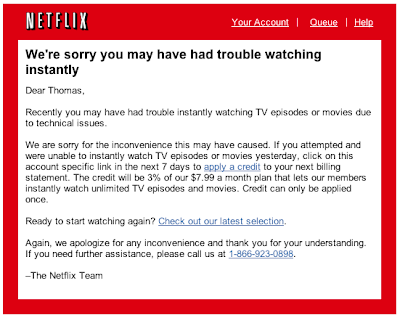 I have been a Netflix subscriber for a long time and have had incredibly few problems. Both with the shipment of discs and with the instant streaming service once they started doing that. So it never fails to impress me when I see them do something like sending me an email to apologize for a problem I never knew I had.

And it's not that I didn't stream any video yesterday, because I did. (To my iPad even!)

Not content with just a lip-service apology, they are willing to credit my account. Granted, 3% of $7.99 is not a huge amount, but I'm sure it adds up for them.

Well, thank you Netflix. I won't be cashing in this credit. Not only because I never noticed whatever problem you might have been having yesterday, but because you are worth every cent I'm paying you and more.