Fair To Compare? Rift Versus World of Warcraft

March 22, 2011
Rift just came out on March 1, 2011 and you are sure to see a lot of articles and commentary comparing it to the de facto king of MMO's, World of Warcraft. And with that will come a slew of comments that take one side over the other in this great debate over which is better. But is a comparison fair or even useful?

A comparison seems reasonable to me. Time and money are in limited supply for most people and when an investment in both of these are involved, it should make people stop and think.

If you were hoping for someone to tell you which is better, you probably need to look elsewhere. What I am about to do is just to share my thoughts on both games. I won't try to sway you one way or another. The hope is that my experiences might give you a starting point in determining what might work best for you.

The first question that people might have is whether or not they can use the hardware they already have or if they will have to invest some cash in upgrades.

There is no avoiding the fact that World of Warcraft is old. That is not necessarily a criticism. What this means is that it performs decently on all kinds of hardware. You don't need a supercharged machine to have an enjoyable experience.

The minimum requirements from Blizzard are:

That puts WoW within reach of a huge number of people. If you have a machine built in the past 5 years, you are good to go.

Rift is very new (obviously) and it targets more contemporary hardware. The minimum requirements from Trion are:

I have an older MacBook Pro and a Mac Pro. Being able to play from both is helpful. The notebook just meets Rift's requirements. Barely.

You can probably guess my other issue with Rift by looking at my hardware. There is no Mac OS X version which means I will have to Boot Camp in order to play. That is not a big deal for some people, but it's a pretty big barrier to entry for me. I hate having to shut everything I might be working on or reading in order to boot into Windows.


World of Warcraft
Again, since WoW runs on an older engine the visuals are not all that impressive by today's standards. They appear a little cartoony sometimes. That said, I like the look. The folks at Blizzard do a great job with what they have to work with and every now and then things get a boost with updates to higher resolution textures or the addition of things like new water effects.

Here are a couple WoW shots: 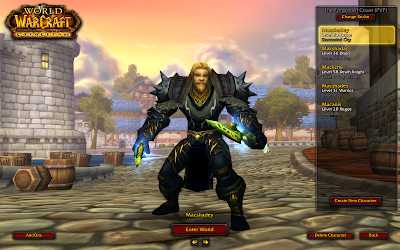 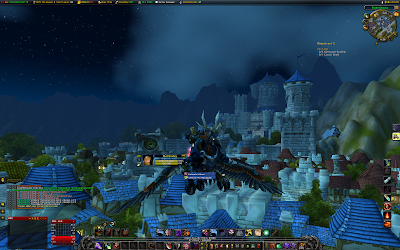 Visually, Rift is gorgeous. I would expect nothing less from a brand new game. Sometimes I even get distracted while site seeing. Things are not perfect, though. While WoW might look a little dated it has the advantage of years of tweaks. Rift is version 1.0 (probably 1.01 by the time this is published) and you will occasionally run across oddities. These can be annoying and sometimes amusing. It just goes with the territory.

And a couple of Rift screenshots to compare against: 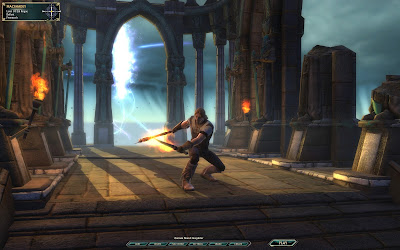 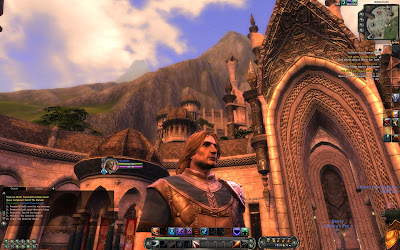 This is going to be highly subjective obviously, but I felt it was worth noting.

WoW sounds kind of match the visuals. They are a little cartoony. But that is really what you want. Anything else would be jarring as your eyes register one thing and your ears another. I also heavily rely on sound to let me know what is going on and where it's going on.

Where Blizzard really shines is in the soundtrack area. The music in World of Warcraft is epic and the way it fades in and out based on where you are and what you are doing in the game is extremely well done.

In Rift the sounds also match the visuals. When you hit something it sounds like something has been hit and hit hard. The music is pretty good also, but whether it is because the game is new to me and I am concentrating on all kinds of other things or because I just haven't gotten that deep into the game yet, the music just has not had a big impact on me. It's good, just not great. Yet.

Sound in Rift does not seem to be positional. I tend to rely very much on audio cues and when I hear a wolf growling, I cannot tell where it is or how far away it is. It sounds like I'm riding the darn thing half the time. Maybe it's just me, though.

On the other hand, one really great sound cue is what you hear when a rift materializes. I have gotten in the habit of scanning the skies whenever I hear something like thunder rolling in the distance. It's a small thing, but it makes the world seem a much larger and more epic place.

There is an extremely healthy add-on community for WoW. Almost any feature or user interface change that you can imagine can be done. While that might be a slight exaggeration, you will find numerous ways to tailor the game to suit your playing style, whatever it might be.

Character customization, on the other hand, is fairly limited. There are several models per race and style, with various hair styles, colors, etc. It's a decent system.

Armor and clothing are even more locked in. Gear models will be reused in various places. Sometimes with differences in coloring and sometimes not. This is not necessarily a bad thing, however, as you are able to make judgements on an opponents (if PvP is your thing) level and ability simply by taking stock of what they are wearing.

As far as I know, there is no add-on community. I'm not even sure that there is any sort of API for developers to leverage. So what you get out of the box is pretty much it. (If I learn differently, I will update this post.)

Even with that, many of the things you need add-ons for in WoW come native in Rift. For instance, every component of the user interface is moveable. This is a big deal for me since I like faceplates closer to the center of the screen. I play on a 30" monitor most of the time and keeping as much critical information front and center is huge. Not only that, but the UI changes you make persist with the character. Which means when I log on to the notebook, the layout is the same. (Although to be fair, the difference resolutions between desktop and notebook do mean that some adjustments might need to be made.) 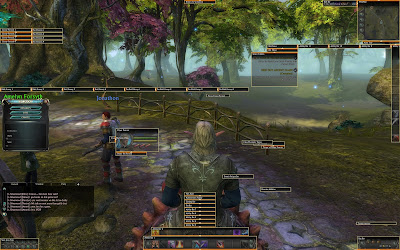 Sadly, I started this article during the public beta before the game was released. Between one thing and another, distractions of various sorts (including playing Rift) I have dragged this out way too long. The more I play, the more I find to talk about and the longer this article gets. I haven't even touched on Lore, community, public groups, quests, characters... you get the idea. But I will close this thing out and save some virtual ink for another day.

Unfortunately I really feel as if I have not met the goal I set for myself when I started which was to give fairly casual WoW players an idea of what they could expect from Rift and whether it was worth their time and money to try it out. My opinion is that if you like World of Warcraft, you will find a lot to like in Rift. It does many things as well or better and when you consider that this horse is just barely out of the gates, it bodes well for an exciting race ahead of us.

What was that noise? Oh, no! Another rift?!

Grab your gear and LET'S GO! 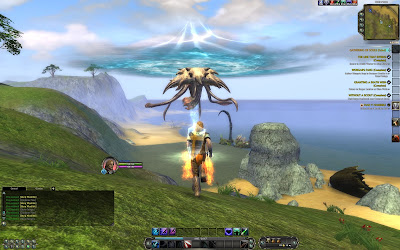