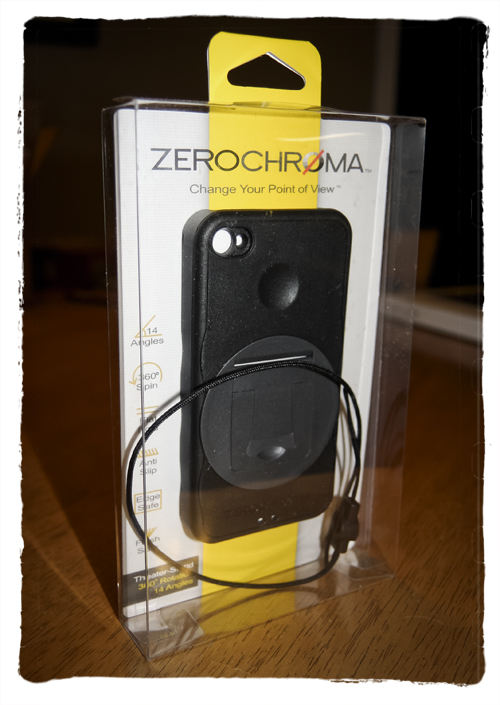 A strange as it sounds, one of the features on several of the new generation Android phones that I've been envious of, particularly those from HTC, is the kickstand. I know. It seems trivial. However, I watch a lot of video on my iPhone 4 and iPad and I spend an inordinate amount of time finding ways to prop it up. Seeing your phone or tablet slide off a window sill may do wonders for honing your reflexes, but won't do a thing for your pulse or blood pressure.

Enter the cases from Zero Chroma.

I cannot remember exactly where I heard about this case except to say it was probably while listening to one of the many podcasts I follow. Regardless, it sounded exactly what I had been looking for. I went ahead and ordered cases for both my iPhone and iPad. This review is specific to the phone and the tablet review will follow shortly. 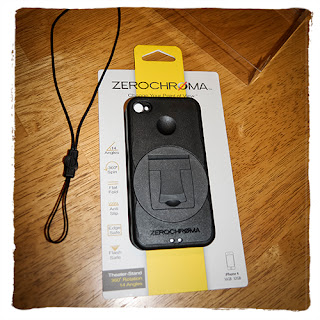 The packaging is fairly simple and you get a case and a case strap (which is pretty unusual). The two holes you see near the bottom of the case are where you would attach the case loop. Personally, I am not really sure how useful this is for day to day activities. If you are using your phone as a point and shoot camera, it makes a little more sense. I opted to ignore the strap entirely.
I chose the black and gray model, but they also offer a white and gray combination as well as a pink version. 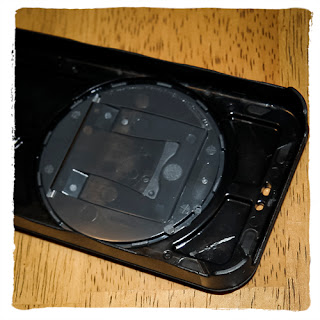 The case itself is made of several molded plastic parts. There is the main case body, the rotating circular stand mount, the stand itself and the slightly more rubbery outer edge. Everything seems to fit together very well. 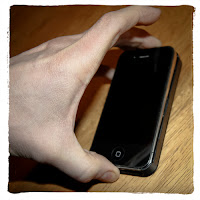 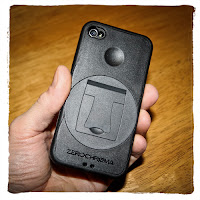 Installation is extremely simple. Just place the phone within the case borders and press down at each corner. The fit is snug and you should feel a slight click as each corner snaps into place. I have been using the case for several weeks now and my phone has never once thought about escaping its confines.
Obviously, if you turn the case over and do not see your camera lens in the camera hole, you have put it on the wrong way around. And given the opening in the case for the volume and mute switch, you probably had to work way to hard to get a fit that must be less than perfect. My point is that unless you really try, you cannot mess this up. 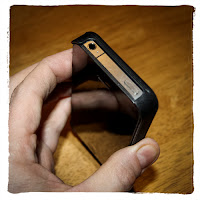 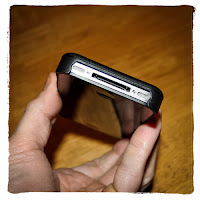 Speaking of openings, both the top and bottom are completely open. This means that many accessories that are impacted by cases that only provide opening just large enough for headphones or the 30-pin connecter will have a much better chance at working here.  Also of note is the complete lack of obstruction for both the speaker and microphone ports.
Not pictured above but viewable in some of the pictures below is the area for volume and mute buttons. Shortly before this review was written, iPhone 4 availability on Verizon was announced and there have been some minor changes to the phone which resulted in the mute button having been moved higher up on the side of the phone. This renders some cases unusable if, once again, they provided openings specific to each port and control. While I cannot say for sure, it seems likely that this case will work with the Verizon iPhones. If I find out for sure one way or another, I will update this article. 1

This is also the perfect type of case for anyone out there who may still be concerned about "glassgate" issues allegedly caused by some slider-style cases. 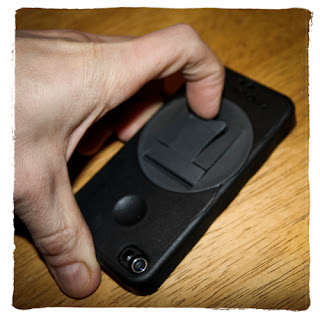 Now we come to the best part of the case. The kickstand. Operation is simple, with the tip of a finger or a finger nail pry the stand away from the case. It moves fairly freely up until you hit the first position where it clicks into place. This is as it should be, in my opinion. If you have big fingers and very short nails, you may have some problems, but most people should be fine. 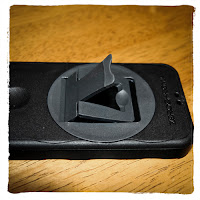 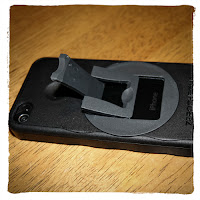 There are fourteen (14) lockable positions so the combination of those and the ability to also rotate the stand give you quite a bit of flexibility in positioning. 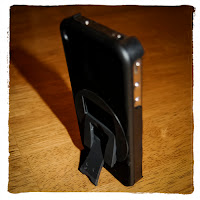 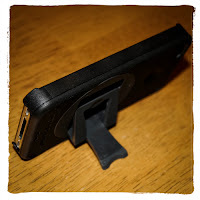 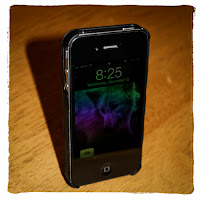 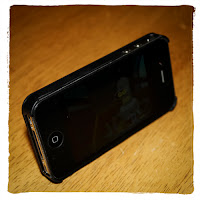 The plastic used for the bottom edge is a slightly more rubbery plastic which allows for some additional grip on harder, slippery surfaces. The foot of the stand is also tipped with a softer, rubbery plastic.

Initially, I was a little disappointed with how hard the rubbery edge was, but after a few weeks I have determined that it is plenty "grippy" and I've revised my opinion. I also suspect that the harder material is better for long-term durability. 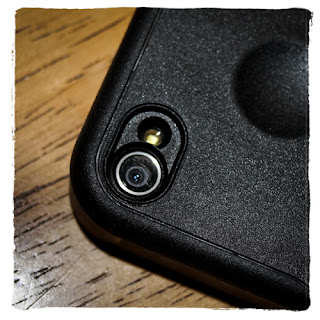 But wait, there is more!

The case is molded with very slight depressions in the sides and a large dimple in the back. It's a very small thing, but they do seem to make holding the case a little more comfortable. At least that is how they are marketed and if they don't help, they certainly don't hurt.

And for those of you who use your cameras, it's worth noting that instead of a single opening for the camera and flash, the two are actually separate. Why does this matter? The fact is that many iPhone 4 cases, particularly those made of more reflective materials, create a glare when the flash reflects off the edge of the case opening for the lens.  I have not done any tests in this area with this particular case, but I also have not noticed any problems with the photographs I've taken since I started using it. Your mileage may vary, but I do not think that you will be disappointed. 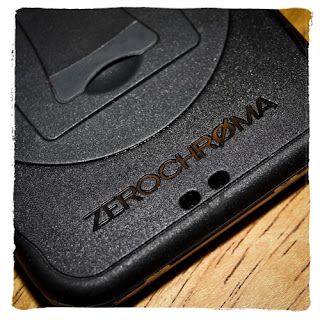 At $44.95, it is on the more expensive side as far as cases go. I would make the argument that you get what you pay for and in this case, I believe that holds true. They do offer free shipping, so that helps mitigate the cost a bit.
Bottom line, I love this case and can recommend it without reservation.
Check out their site for a pretty slick rundown of features as well as ordering information.
http://zerochroma.com/
Update - February 10, 2010
cu4fun confirmed in the comments below that the Teatro case for the iPhone is compatible with the new Verizon iPhones. And a quick visit to the Zero Chroma website shows that they now explicitly list compatibility with both the AT&T and Verizon iPhones.
Good design or luck? Probably a little of both, but I'll give them the benefit of the doubt because the case is just so darn good.
case iPhone review