December 23, 2010
I admit that I am an Apple fan. I'm neither proud nor ashamed of the fact. It is what it is. Frankly, I'm an equal opportunity geek. As such I see a lot of pros and cons in technology from lots of sources. That said, this is going to be a gripe about the iPod app that Apple puts on their iDevices.

My first complaint is that after several years, the iPod app still does not have a landscape mode. Granted, portrait is a better orientation for the vertical way that the menus/listings are laid out, but reformatting for landscape navigation should not be that difficult.

This, however, is relatively minor. I've gotten pretty good at navigating with everything rotated 90 degrees. It's a little silly, but not rant-worthy.

The big problem I have is this.  My iPhone is on a stand, in landscape.  Presumably it knows that it is horizontal.  It is a smartphone, right? So when a video starts to play, why-oh-why does it play as if the phone is standing vertically?

This is what I see: 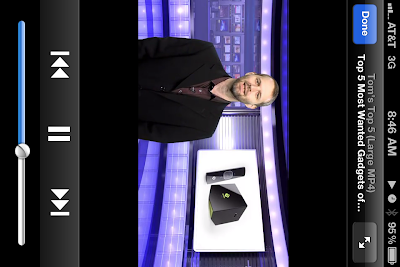 So what do I have to do? I must tilt the iPhone back on its stand until it is flat and then roll it back forwards as if to say, "Here, boy! Roll over. Yes. That's it. Who's a good boy?" That's not the experience I want. If it were, I would hit the animal shelter after work.

I guess it is pretty clever of Apple in a way. Since the UI is designed vertically, my guess is that they assume that nobody would be stupid enough to navigate horizontally. If we have to navigate to a video in portrait it just stands to reason that starting the video in portrait makes sense.

Well guess what? I am exactly that stupid.

Now I'll just go listen to the Sword and Laser podcast where there is no video. (And, yes. I'm obviously a Tom Merritt fan.)
complaint iOS iPad iPhone UI