May 15, 2010
I have had several people ask me about my Lynx photograph.  Unfortunately the answers to those questions reveal how much I really suck at photography.  But for you guys I'm willing to make myself look bad.  So here is what the shot looked like originally: 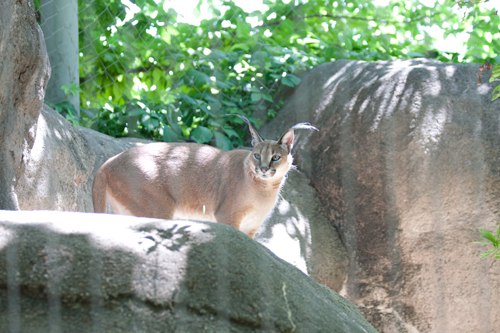 Yeah.  I know!  Just in case you don't see the problems (unlikely as I think that is), I've annotated the picture. 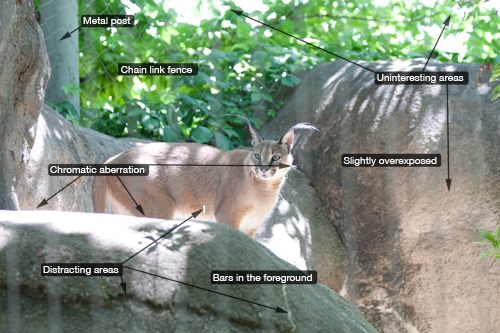 What you can't see is that it's very slightly out of focus as well.

I had pretty much written this picture off and I was very disappointed about that.  I wish I had taken more shots so that I might have something better to work with, but for some reason I just went on to the next exhibit.  At any rate, Photoshop to the rescue!

Some problems are easier to deal with than others.  Cropping helps with the uninteresting areas and exposure can be fixed with curve adjustments.  The rest is slightly more complicated.

First thing I did was to add a levels adjustment layer and mask out the bars in the foreground.  Then by adjusting the levels, I made them darker to match the unobstructed areas.

Next, I used the patch tool to remove the distracting areas.

One of the things that is throwing people off is the depth of field in the final.  That is purely artificial lens blur courtesy of Photoshop.  There are two reasons I did this.  First, with enough of a blur, the chain link fence disappears.  Second, if the cat is the thing most in focus, attention is drawn there.

For my lens blur I created a depth map (a channel mask that defines how far each pixel in the image is from the viewer) and then did quite a bit of cleanup work afterwards by tweaking the layer mask so that the parts of the image that I wanted in focus were not being covered by the blurred layer.  (This is a pain when you consider that every hair you see in focus has lens blurred areas between them.)

Since blurring things tends to smooth them out and since the original image had noise in it that I did not want to get rid of (cleaning up noise has a tendency to get rid of detail), I had to add noise back into the background so make the result more seamless and natural. 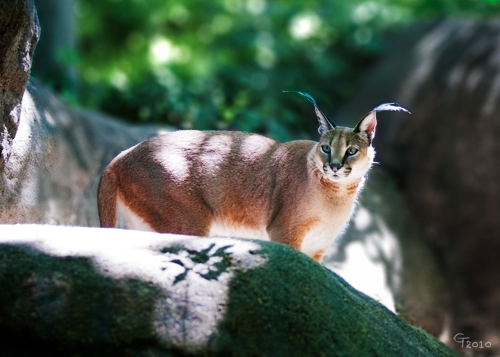 If anyone wants details on a particular step, I'll be glad to go into greater depth or point you to resources already available online. The key is to just have fun with it and go with the flow. As Bert Monroy always says, "Just keep playing."
photography Photoshop